2:32pm: This deal is now official. Southpaw Jonny Venters goes on the 60-day injured list to open a 40-man spot.

12:55pm: The Nationals have struck a deal to acquire righty Daniel Hudson, according to Scott Mitchell of TSN (Twitter link). Minor-league righty Kyle Johnston is going to Toronto in return, per MLB.com’s Mark Feinsand (via Twitter). 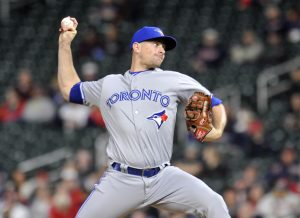 Hudson, 32, emerged as a trade candidate after throwing 48 innings of 3.00 ERA ball for the Blue Jays this year. That’s a nice showing considering that Toronto added him late in camp on a minor-league deal with a $1.5MM base salary and $1.5MM in incentives.

Unfortunately, it’s questionable whether Hudson can sustain that effort down the stretch. He’s averaging a strikeout per inning, but has also handed out 4.3 walks per nine and has benefited from a .258 batting average on balls in play and 80.7% strand rate. While he’s still pumping 96, Hudson is also sitting at a 9.9% swinging-strike rate after topping twelve percent in each of the three prior seasons.

No doubt the Nats don’t expect Hudson to dominate so much as to provide serviceable innings. The club has not had enough of those to this point of the season, creating a need for multiple deadline additions. In all likelihood, Hudson is the first of one or more new relief arms who’ll come to DC in the next two hours.