4:23pm: The Cubs announced the signing. Davis has been optioned to Triple-A to open a roster spot, and Lucroy will join the team tomorrow.

2:25pm: The Cubs are set to sign catcher Jonathan Lucroy following his release by the Angels, MLB Network’s Jon Heyman reports (via Twitter). Gordon Wittenmyer of the Chicago Sun-Times reported earlier this week that Chicago had interest in Lucroy after he’d been designated for assignment by the Halos. 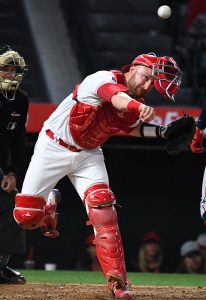 The Cubs dealt away Martin Maldonado prior to the trade deadline but suddenly found themselves with a unexpected need for help behind the plate when Willson Contreras went down with a hamstring injury that is expected to cost him four weeks of action. Lucroy will step in and share catching duties with Victor Caratini in Contreras’ absence.

Lucroy, now 33, was a thorn in the side of the Cubs and their fanbase for when he was one of the best all-around catchers and a two-time All-Star for the division-rival Brewers. Those days are a distant memory at this point, however, as Lucroy has seen both his bat and his defensive skills erode in recent seasons. Dating back to 2017, he’s authored a well below-average .250/.317/.353 batting line despite spending ample time in hitter-friendly settings in Colorado and Texas (78 OPS+).

Defensively speaking, Lucroy was among the game’s best at preventing steals in 2016 (39 percent), but he’s been league average in the three subsequent seasons. His once-elite framing numbers now check in below the league average, and Baseball Prospectus rates Lucroy as the game’s weakest pitch blocker.

It’s not a terribly appealing profile, especially relative to Lucroy’s peak years, but he’s an experienced backstop who can at the very least be considered an upgrade over current backup Taylor Davis. Caratini was also spiked in the hand in last night’s game, though he didn’t come out of the game and the Cubs have given no reason to be concerned about a trip to the injured list for the young switch-hitter.

Lucroy will only cost the Cubs the prorated portion of the league minimum — about $158K between now and season’s end. The Angels will be spared that sum but remain on the hook for the remaining $797K or so of Lucroy’s $3.35MM base salary this season. Lucroy will be a free agent once again this offseason.