Nov. 29: Vogt will be paid $2.5MM in 2020 and has a $500K buyout of a $3MM option for the 2021 campaign, Nick Piecoro of the Arizona Republic reports. That option can trigger automatically depending on playing time, and the contract contains escalators (based on games started) that would boost Vogt’s salary in 2021.

Nov. 26: The Diamondbacks made a low-cost strike on the free-agent market, adding catcher Stephen Vogt on a one-year contract, the team announced Tuesday evening. The deal will reportedly promise Vogt a total of $3MM, and it also contains a vesting option for the 2021 season. Vogt is represented by All Bases Covered Sports Management. 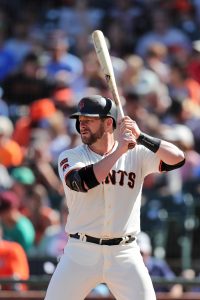 Vogt, 35, feared his career could be over following a 2018 shoulder surgery with the Brewers, but he landed with the Giants on a minor league pact and proved himself with a quietly strong rebound season. In 280 plate appearances spread over the life of 99 games, the former All-Star hit .263/.314/.490 with 10 home runs.

Arizona’s need for a backstop isn’t necessarily acute, but Vogt’s left-handed bat will pair nicely with the up-and-coming Carson Kelly, who hits from the opposite side of the dish — and does so quite well (.356/.462/.667 versus lefties in 2019). Vogt will also give the 25-year-old Kelly another veteran mentor under whom to study, replacing fellow free agent Alex Avila, who remains unsigned but now appears destined to land elsewhere.

The D-backs also have veteran catcher Caleb Joseph on the 40-man roster as a third option, and given the fact that they’ve previously carried three catchers at a time even with a 25-man roster, it seems plausible that they’ll do so again now that rosters are set to expand to 26 players for the 2020 season. Alternatively, Vogt’s acquisition could also spell the end of Joseph’s time with the Arizona organization. He’s arbitration-eligible this winter and projected to receive a $1.2MM salary, which the club may feel too steep to pay a third catcher who falls behind both Kelly and Vogt on the depth chart.