The Astros have announced a two-year deal to bring back reliever Joe Smith. The deal includes $8MM in guaranteed money, per Joel Sherman of the New York Post (via Twitter). Smith is a client of Excel Sports Management. 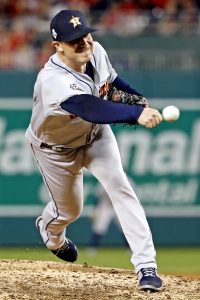 Smith missed a big chunk of 2019 owing to a torn Achilles, but bounced back with aplomb and threw 25 excellent innings down the stretch. The 35-year-old sidearmer obviously convinced the Houston brass that he has plenty left in the tank.

Though he has rarely been a major strikeout pitcher, Smith has always produced strong groundball numbers. Outside of his tendon tear, he has been quite durable. And he has a long and consistent history of befuddling opposing hitters. In 695 1/3 frames at the game’s highest level, he carries a 2.98 ERA and has yet to finish a season with an ERA over 3.83.

Upon his return last year, Smith sat comfortably in his typical range in terms of velocity and swinging-strike rate. He attacked the zone more than ever and lived to tell the tale, unlike many 2019 pitchers in a longball-laden season.

Despite his relatively late return to action, the Astros had gained full trust by the end of the season. They went to Smith frequently in the postseason, with four appearances each in the ALCS and World Series after a pair of divisional showings. He ultimately allowed three earned runs in 8 2/3 innings.