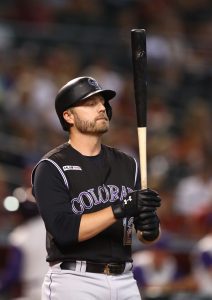 “I’ve moved beyond that,” Reynolds said when asked if he planned to seek another contract once MLB’s transaction freeze has been lifted. “I’ve retired. … I’m really enjoying time with my family, and it’s time for me to move on and find something else to do.”

The 36-year-old Reynolds spent the majority of the 2019 season in the Rockies organization, serving as a part-time first baseman and a bench bat until he was cut loose on July 28. He’d enjoyed a quality season with the Nationals a year prior in 2018, but Reynolds struggled to the lowest offensive numbers of his career with the Rox last year.

Originally a 16th-round pick of the Diamondbacks out of the University of Virginia back in 2004, Reynolds made his big league debut less than three years after being drafted. Reynolds was never considered one of the organization’s premier prospects — his No. 7 ranking on Baseball America’s list of D-backs prospects prior to the ’07 campaign was the only time he broke their top 30 — Reynolds hit the ground running. He was promoted to the big leagues in mid-May and closed out the remainder of the season as a regular in the lineup, hitting .279/.349/.495 with 17 home runs.

By 2008, Reynolds was Arizona’s everyday third baseman. His power was unquestionable, although the same could be said of his questionable contact skills. Reynolds became one of the game’s quintessential boom-or-bust players, regularly headlining home run and strikeout leaderboards alike. From 2008-11, he averaged 35 big flies per season  but also led his league in strikeouts each year along the way. At that time, a player who was punching out in roughly a third of his plate appearances was an alarming anomaly; the league average strikeout rate back in Reynolds’ first full year was 17.5 percent — a full six percent lower than 2019’s mark.

Reynolds had a rough year in 2010, prompting the D-backs to trade him to the Orioles in return for reliever David Hernandez and prospect Kam Mickolio. He bounced back with the Birds and helped them to the postseason in 2012, but Baltimore declined an $11MM club option over Reynolds’ final arbitration year that offseason and non-tendered him, making him a free agent for the first time in his career.

Reynolds would bounce from Cleveland to New York to Milwaukee to St. Louis to Colorado to D.C. and back to Colorado on a series of one-year and minor league deals from that point forth. He delivered some productive seasons along the way and even popped 30 homers for the 2017 Rockies before giving the Nationals an absurd 5-for-5, two-homer, 10-RBI day in 2018 (video link).

Reynolds will conclude his playing career with a .236/.328/.453 batting line over the life of 6243 plate appearances and 1688 Major League games. In that time, he belted 298 home runs, 253 doubles, 14 triples and stole 64 bases while also scoring 794 times and knocking in 871 runs. The slugger took home nearly $30MM in career earnings while providing a litany of tape-measure home runs on which we can all fondly look back. Best wishes to Reynolds and his family in whatever lies ahead.