In the first trade since MLB’s transaction freeze has lifted, the Padres are set to acquire infield prospect Jorge Mateo from the A’s, Jeff Passan and Kiley McDaniel of ESPN report (Twitter link). Oakland will receive a player to be named later in return. San Diego has announced the trade. 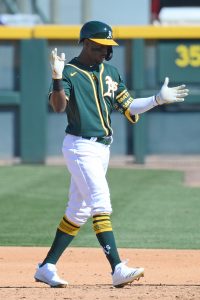 Long regarded as one of baseball’s more promising prospects due in no small part to his 80-grade speed, Mateo has yet to debut in the Majors. The 25-year-old was a central piece in the trade that sent right-hander Sonny Gray from Oakland to New York, but he hasn’t been afforded a chance in the Majors with either the Yankees or the A’s. He has, however, been on the 40-man roster of both clubs long enough to have exhausted all of his minor league options. In other words, he’ll have to make the Padres’ Opening Day roster or else be designated for assignment.

Mateo was one of several players in the mix for playing time at second base in Oakland, vying with Franklin Barreto, Tony Kemp and Rule 5 pick Vimael Machin for that role. Now in San Diego, he’ll once again be looking up at Jurickson Profar — a former ballyhooed prospect himself — and hoping to find his way into the mix for at-bats. Mateo does have a bit of center field experience as well, having logged 247 innings there back in 2017.

It’s easy to see why Mateo was so well-regarded back in 2015-16. He split the 2015 campaign between Class-A and Class-A Advanced at just 20 years of age and slashed a combined .278/.345/.392. He only homered twice, but Mateo added 23 doubles, 11 triples and an unheard-of-in-today’s-game 82 stolen bases in just 117 games. His stock dipped a bit with a mediocre showing in 2016, but 2017 saw Mateo bounce back with a .267/.322/.459 slash and 52 steals. A shortstop with that type of output piqued the Athletics’ interest, and the A’s sent Gray to the Bronx in exchange for Mateo, Dustin Fowler and James Kaprielian in a trade that now hasn’t really panned out for anyone involved.

Mateo’s numbers cratered in 2018, and while last year’s .289/.330/.504 slash in Triple-A were a nice rebound, the bounceback effort wasn’t quite as strong as it’d appear on the surface. That slash line translated to just a 96 wRC+ in the supercharged offensive environment in the Triple-A Pacific Coast League (where Mateo’s home park in Las Vegas is particularly hitter-friendly).