The Cubs have acquired outfielder Cameron Maybin from the Tigers, tweets ESPN’s Jeff Passan.  The Cubs will send infielder Zack Short to the Tigers in return, according to Chris McCosky of The Detroit News. 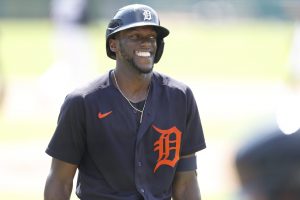 Maybin, 33, has been about league average in his brief 45 plate appearances for the Tigers this year after signing as a free agent in February.  He missed time early in the month with a quad strain.  The Tigers’ 10th overall pick way back in 2005, Maybin has created value in a utility role in recent years.  He posted a 127 wRC+ for the Yankees in 2019, and is able to handle all three outfield positions.  A 14-year veteran, Maybin is owed about $225K on the season.

Maybin is the Cubs’ second bench bat addition in two days, as they picked up Jose Martinez from the Rays yesterday.  The Cubs’ depth was a bit compromised with Steven Souza Jr. on the IL for a hamstring strain and Kris Bryant out with a sprained finger and sore wrist.  The first-place Cubs have been otherwise focused on the bullpen today, adding lefties Andrew Chafin and Josh Osich in trades.

Short, 25, reached Triple-A in 2019 as a middle infielder.  Prior to the season, Baseball America ranked Short 28th among Cubs prospects, citing “a consistent blend of strong defensive skills and sneaky impact at the plate.”