Royals icon Alex Gordon is set to announce his retirement after a 14-year career at the Major League level, reports Jeffrey Flanagan of MLB.com (via Twitter). The club has confirmed Gordon’s retirement. He’ll play out the remainder of the current season before formally calling it a career. 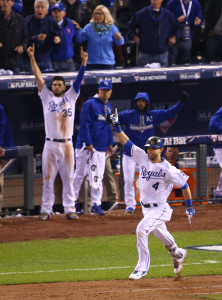 Now 36 years old, Gordon was the No. 2 overall pick by the Royals back in 2005. He spent his entire professional career in the organization, helping to stoke a baseball renaissance in Kansas City as the Royals appeared in back-to-back World Series, including their 2015 victory.

Long before Gordon was the face of the franchise, however, he was perhaps the poster child for not giving up on a top prospect after early struggles. Gordon spent just one full season in the minors before arriving in the big leagues with outlandishly high expectations in 2007. He put together a pair of solid but unspectacular seasons as the Royals’ third baseman in 2007-08 before a pair of injury-ruined campaigns in 2009-10 caused many to write the once-promising talent off at just 26 years of age. Struggles at third base had prompted the Royals to move Gordon to left field, and his .222/.319/.365 slash line in those two seasons certainly didn’t look like the savior for which Royals fans had pined after more than a decade of mediocrity.

That feels like an eternity ago, and it’s entirely due to Gordon’s remarkable mid-20s turnaround. Healthy in 2011, Gordon erupted with a .303/.376/.502 batting line, strong baserunning skills and elite left-field defense that netted him the first of an eventual seven Gold Glove Awards. From 2011-15, Gordon batted .281/.359/.450 while making three All-Star Games and totaling 26.4 wins above replacement. His breakout made him the foundational bedrock upon which the team’s young core could be built up.

Fellow homegrown talents such as Eric Hosmer, Mike Moustakas, Salvador Perez, Danny Duffy and Greg Holland joined trade acquisitions Lorenzo Cain, Alcides Escobar, James Shields and Wade Davis (among others) in fueling a brief but brilliant peak for GM Dayton Moore’s club. After a near-miss versus the 2014 Giants, the 2015 Royals ended a three-decade World Series drought. While Gordon’s overall postseason numbers — .222/.333/.398 — don’t stand out as dominant, the Royals may not have had a trophy to celebrate without his one-out, game-tying home run against Jeurys Familia in the bottom of the ninth of 2015’s Game 1 (video link).

Gordon’s breakout and the team’s revenue boost from consecutive World Series showings gave now-former owner David Glass the financial comfort to offer the three-time All-Star a franchise-record contract valued at four years and $72MM. That arrangement spanned the 2016-19 seasons, and while Gordon mulled retirement this time last year, he ultimately opted to return for one final go-around.

Certainly, Gordon wasn’t planning on doing so in the absence of the fans who hold him so dear in their hearts, but one can certainly imagine ample future opportunities for the K.C. faithful to express their gratitude. Teammate Whit Merrifield has already suggested that it’s “time to build the statue” on Instagram, and it seems there’s a good chance that Gordon will be the last Royal to ever don No. 4.

With four games yet to play, we can’t be sure of the exact totals Gordon will carry into retirement, but his overall body of work is strong. In 7237 plate appearances, all with the Royals, he’s a .257/.338/.411 hitter with 190 home runs, 113 stolen bases, 357 doubles, 26 triples, 867 runs scored and 749 runs batted in. Since he became a full-time outfielder in 2011, Gordon has the fourth-most Defensive Runs Saved of any Major League player, regardless of position, with 112.

All told, Gordon’s career has been worth 35 wins above replacement, per Baseball-Reference, although his value to the organization’s fans and the teammates who’ve followed his lead over the course of his career transcend that number. Gordon earned more than $117MM in his 14 MLB seasons and, along the way, cemented himself as a legend within the franchise’s lore — one who’ll be celebrated in Kansas City alongside greats like George Brett and Frank White for decades to come.