In a surprise move, the Twins are set to promote top outfield prospect Alex Kirilloff for what would be his MLB debut during the first round of the postseason. Phil Miller of the Minneapolis Star-Tribune reported last night that the move was being discussed, and both Seth Stohs of TwinsDaily.com and Jonathan Mayo of MLB.com (Twitter link) hear that Kirilloff is indeed being added to the big league roster. His contract will need to be formally selected, although fellow rookie outfielder Brent Rooker is on the 10-day IL with a season-ending forearm fracture, so he could just be moved to the 45-day injured list to open a spot on the 40-man roster. 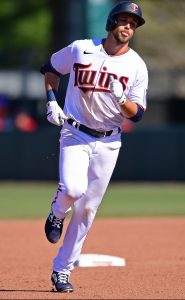 Kirilloff, 22, was the No. 15 overall pick of the 2016 draft. He missed the 2017 due to Tommy John surgery but cemented himself as one of the game’s top 50 overall prospects when he laid waste to Class-A pitching in his 2018 return. The Pittsburgh native split that season between Class-A and Class-A Advanced, posting a combined .348/.392/.578 slash with 20 homers, 44 doubles and seven triples in just 561 plate appearances. He followed that up with a .283/.343/.413 slash that was good for a 121 wRC+ in the pitcher-friendly Double-A Southern League last year.

The move to bring Kirilloff up could very well mean bad news for either Byron Buxton or Josh Donaldson, each of whom has been hobbled by injuries recently. Buxton showed concussion symptoms after being hit in the head by a pitch late last week, while Donaldson has again been dealing with calf issues. Both Buxton and Donaldson worked out with the club yesterday, and manager Rocco Baldelli tabbed it a “relatively good day” for both players.

If and when Kirilloff is added to the roster there’s no guarantee he’ll draw a start in the series. Even if Buxton is sidelined, the club could lean on Eddie Rosario, Jake Cave and Max Kepler across the outfield. Kirilloff, as is the case with that trio, is a left-handed bat, so he wouldn’t even necessarily draw a platoon-based date with Houston lefty Framber Valdez. At the very least, however, he’d give the club an intriguing lefty bat to pinch-hit. Kirilloff has experience at all three outfield positions and at first base as well, so Baldelli could work him into the mix in a variety of ways.

Kirilloff won’t get any big league service time for appearing on the Major League roster in the playoffs, but his promotion only further confirms that he’s on the cusp of an audition as an everyday piece in Minnesota. The only question is just where he’ll slot in. The Twins locked Kepler up on a five-year extension just last year and control Buxton through the 2022 season. Rosario, meanwhile, is only controlled through 2021. Between fellow top 100 prospect Trevor Larnach and the aforementioned Rooker, Minnesota is well stocked with corner outfield bats that are MLB-ready or quite close to it.