The Blue Jays have announced that free agent left-hander Robbie Ray has been re-signed.  ESPN.com’s Jeff Passan (Twitter link) was the first to report that the southpaw will receive a one-year contract worth $8MM. 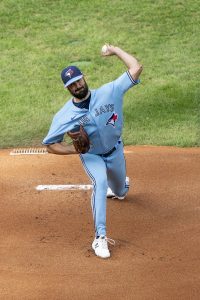 Still, the Jays clearly saw enough to welcome Ray back into the fold and line him up for a spot in Toronto’s rotation.  Passan notes that the Blue Jays intend to use Ray as a starting pitcher, adding him to a rotation mix that includes Hyun Jin Ryu, Nate Pearson, Tanner Roark, and Ross Stripling.  It’s safe to assume that the Jays aren’t done exploring the pitching market, given how Ray, Roark, and Stripling all didn’t pitch well in 2020 and Pearson also struggled (and had some injury problems) in his first MLB season.

Home runs have always been an issue for Ray over his seven-year career, though his control went from being a concern to a full-on problem in 2020.  The one constant, however, has been strikeouts, as Ray has an 11.1 career K/9 and even led the league in that category in 2017 (12.1).  That season was Ray’s peak, as he finished seventh in NL Cy Young Award voting and seemed to be blossoming as a front-of-the-rotation starter.  However, Ray was more okay than spectacular in 2018-19, as his walk totals crept upwards, his ground-ball numbers declined, and batters began to generate more hard contact against his arsenal.

Ray’s fastball velocity also dropped by almost two miles an hour, from a 94.3mph average in 2017 to a 92.4 average in 2019.  His velocity clicked back up to 93.7mph last season, and while there wasn’t much to like about Ray’s Statcast metrics in 2020, he still finished in the 80th percentile in fastball spin rate.

Ray is still only 29, and the one-year commitment gives the Blue Jays a chance to take a longer look at Ray without sacrificing any flexibility in future payrolls.  Toronto is thought to be one of the few teams who has some spending capacity this offseason, and this early strike to re-sign Ray (when most clubs reportedly have yet to even figure out their 2021 budget situations) indicates that the Jays could be aggressive players as they look to build on their wild card berth from the past year.  MLBTR ranked Ray 36th on our list of the winter’s top 50 free agents, correctly predicting him for a one-year contract but for only $6MM.