NOV. 29: The Royals have agreed to a deal with southpaw Mike Minor, The Athletic’s Ken Rosenthal reports (Twitter link).  The contract will become official when Minor passes a physical.  Minor is represented by Jet Sports Management.

ESPN.com’s Jeff Passan reports that it is a multi-year pact between the two sides, with MLB.com’s Mark Feinsand adding that the contract is for two years.  This tops MLBTR’s prediction of a one-year, $6MM contract for Minor, and he is now the first free agent of the 2020-21 offseason to sign a multi-year contract.  We’ve already seen a fair bit of action within the pitching market, though Robbie Ray (Blue Jays), Charlie Morton and Drew Smyly (both Braves) all signed one-year deals, and Marcus Stroman (Mets) and Kevin Gausman (Giants) accepted one-year qualifying offers to remain with their former teams. 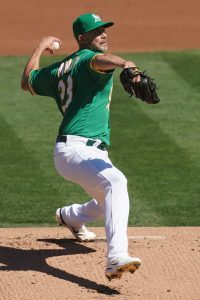 From there, Minor went on to sign a three-year, $28MM free agent deal with the Rangers and resumed his career as a starter, displaying much of the same solid form that made him a valued member of the Braves’ rotation from 2010-14.  Minor posted a 3.84 ERA over 365 1/3 innings in 2018-19, even finishing ninth in AL Cy Young Award voting during the 2019 campaign.

While Minor’s overall Statcast picture wasn’t pretty, he still boasted an elite fastball spin rate that put him in the 97th percentile of pitchers.  ERA predictors were also a bit more sympathetic to Minor’s performance in 2020, with a 4.64 FIP, 4.50 xFIP, and 4.20 SIERA.

With those silver linings, Minor’s generally solid track record, and their prior relationship with Minor in mind, the Royals clearly felt comfortable in making a two-year commitment to a pitcher who turns 33 in December.  The Royals haven’t had a winning record since their World Series-winning 2015 season, though GM Dayton Moore has stated that he expects his team to be competitive in 2021, perhaps indicating that the Royals are planning to turn the corner from their latest rebuild.

Minor will now join Danny Duffy as the veteran staples of the K.C. rotation, with Brad Keller entering his fourth MLB campaign and youngsters Brady Singer and Kris Bubic looking to build off respectable rookie seasons.  Jakob Junis and Carlos Hernandez are also on hand as depth options, and noted prospects Daniel Lynch and Jackson Kowar are also likely nearing their big league debuts, so the Royals have quite a few interesting rotation options on hand.  MLB.com’s Jeffrey Flanagan also raises the intriguing possibility that Minor could be a fallback plan for the Royals at closer, since Minor performed well as a ninth-inning option for Kansas City in 2017.