The Blue Jays and right-hander David Phelps are in agreement on a Major League contract, reports MLB.com’s Mark Feinsand (via Twitter). The Jet Sports client has already passed his physical, Feinsand adds. ESPN’s Jeff Passan tweets that Phelps will earn $1.75MM on the deal and can make another $750K via incentives. 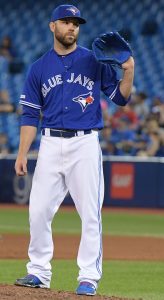 Phelps, 34, will return to the Jays for a second time in his career after a mixed bag of a 2020 season. He was excellent in 13 innings with the Brewers last year before being torched for 11 runs in 7 2/3 innings following a trade to the Phillies. Phelps missed the 2018 season due to Tommy John surgery but was effective with the Jays and Cubs in his 2019 return. Toronto flipped him to Chicago at the ’19 deadline and received righty Tom Hatch in return.

Despite that ugly finish in 2020, Phelps posted a career-high 36.5 percent strikeout rate against a career-low 5.9 percent walk rate last year. That’s reason for encouragement moving forward, and Phelps’ general track record at the MLB level is a good one. He oscillated between the rotation and bullpen for the Yankees early on but has taken off since moving to the ’pen on a full-time basis.

From 2016-20, Phelps has tossed 197 1/3 innings with a 3.24 ERA, a 3.47 SIERA and a 29.6 percent strikeout rate that sits well above the league average. His 10.6 percent walk rate is a tick above par and could stand to come down, so the Jays will surely look to help him continue last year’s strides in that regard (while leaving behind the home-run woes that plagued him in Philadelphia).

Phelps becomes the third veteran addition of the offseason for a Toronto bullpen that previously was lacking in experience. The Jays already added Kirby Yates on an incentive-laden deal, and they also bought low on righty Tyler Chatwood with the intent of moving him from a starting role to the bullpen. That trio will be joined by Jordan Romano, Rafael Dolis and likely Ryan Borucki, though the final few ’pen spots and specific roles (beyond Yates, who is expected to close) will need to be sorted out in camp.