Adam Wainwright is staying in St. Louis. The Cardinals announced an agreement to bring the right-hander back for the 2022 season. Wainwright’s deal comes with a $17.5MM salary. The deal also includes a full no-trade clause, although Wainwright has long had guaranteed no-trade rights as a player with more than ten years of big league service, the last five of which have come with his current team. Wainwright is represented by Aegis Sports Management. 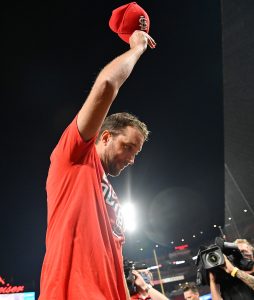 Wainwright, who turned 40 at the end of August, has turned back the clock to deliver one of the best seasons of his career in 2021. He’s second among all Major League pitchers with 206 1/3 innings pitched and has turned in a 3.05 ERA that stands as the fifth-best mark he’s ever notched over a full season.

Though he’s averaging just 89.3 mph on his heater this season, Wainwright has avoided hard contact, displayed strong command (six percent walk rate) and kept the ball on the ground at an above-average clip. That pairs nicely with the all-world infield defense in St. Louis and has helped Wainwright thrive even in spite of a below-average 21 percent strikeout rate. He’s also kept the ball in the yard at his lowest rate since 2014 (0.92 HR/9, 11.7 percent homer-to-flyball rate).

That excellent season will likely get Wainwright some votes in Cy Young balloting, even if he’s not favored to win it. (Corbin Burnes, Max Scherzer, Zack Wheeler and Walker Buehler are among the other top contenders.) It also positioned Wainwright to handily top this season’s $8MM salary, which has turned into a bargain for a scorching-hot Cardinals team that won 17 straight games to clinch a Wild Card berth — a sudden-death showdown for which they’ve already announced Wainwright as the starting pitcher.

Retaining Wainwright gives the Cardinals some additional certainty in the rotation next year. He’ll slot in alongside fellow righties Jack Flaherty, Miles Mikolas and Dakota Hudson, the latter of whom just returned from Tommy John surgery. Top pitching prospect Matthew Liberatore could be ready for his debut early in 2022, and the Cards have a handful of other in-house options, including Jake Woodford, Johan Oviedo and, if they want to move him from the bullpen to a starting role, Alex Reyes.

The Cards could of course dip their toes into the offseason market for starting pitching. They’re currently set to lose Kwang Hyun Kim, J.A. Happ and Jon Lester to free agency, and a lack of depth nearly sank their season earlier this summer when the majority of their rotation hit the injured list. St. Louis had under $90MM in guaranteed contracts on the books in 2022 before re-signing Wainwright — Matt Carpenter and Carlos Martinez will be off the books once their 2022 options are declined — so there’s certainly room to add to the payroll.

From a broader perspective, Wainwright’s return also sets the stage for an emotional season at Busch Stadium. He’s not yet made a declaration that the 2022 campaign will be his final season in the Majors, but given his age, that’s of course a possibility. Even if Wainwright sets his sights on pitching beyond next season, the 2022 campaign will be a farewell tour for Yadier Molina, who has announced his intention to retire following what will be his 19th season in St. Louis.

Wainwright and Molina are an iconic duo in St. Louis — a battery pairing emblematic of the repeated contenders put forth during this generation of Cardinals baseball. They’ve won a pair of World Series rings together, in 2006 and 2011, and there are few more memorable moments in recent Cardinals history than Wainwright buckling Carlos Beltran to close out the ’06 NLCS and then fanning Brandon Inge to clinch the organization’s first World Series in (at the time) more than two decades. Molina, naturally, was on the receiving end of both pitches.

Regardless of Wainwright’s future status, it’ll be the last season that Cardinals fans can root on a pair that seems destined to have their numbers retired and head into the team’s Hall of Fame. At 184 career wins, Wainwright will have a chance to cross the 200 mark next year as well — a milestone reached only by 119 players in big league history.

Derrick Goold of the St. Louis Post-Dispatch first reported that Wainwright and the Cardinals had agreed to an extension. Jon Heyman of the MLB Network reported the contract was worth more than $15MM. The Associated Press reported the $17.5MM figure and the presence of the no-trade clause.