The Rockies are keeping their first baseman in the fold, announcing an agreement with C.J. Cron on a two-year contract extension. The deal guarantees the Moye Sports Associates client a total of $14.5MM. 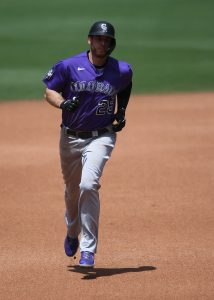 It’s the second extension of the day for the Rox, who also just locked up righty Antonio Senzatela on a five-year contract. Unlike Senzatela, who was already under team control for two more seasons via arbitration, Cron was slated to become a free agent after the World Series. The two sides had publicly expressed interest in working out a reunion, however, and it seems they’ll do so before Cron ever hits the open market and hears from other clubs.

The extension will bring Cron some stability after pinballing around the league in recent seasons. The former Angels first-rounder was traded to the Rays in the 2017-18 offseason, claimed off waivers by the Twins in the 2018-19 offseason, signed by the Tigers (after being non-tendered by Minnesota) in the 2019-20 offseason, and signed a minor league with Colorado this past offseason.

That minor league pact proved to be an overwhelming bargain for the Rox, as Cron rebounded from last year’s season-ending knee surgery and raked at a .281/.375/.530 clip with 28 home runs — the second-highest total of his career. That said, there are some red flags to consider as well.

Beyond the fact that Cron will turn 32 in January, he displayed some eye-opening splits. The overwhelming amount of Cron’s damage came at Coors Field, where he batted .326/.412/.661 as opposed to .235/.337/.397 on the road. He was also, as is typically the case, much more productive against left-handed pitching (.311/.393/.583) than against right-handed opponents (.269/.368/.503). The Rockies clearly weren’t concerned by the splits, however, and for a fairly modest price tag of $7.25MM per season, that’s a defensible stance. Cron’s numbers against right-handed opponents, after all, were still strong. And while the home/road splits are glaring, he still managed an above-average on-base percentage on the road while maintaining a respectable isolated power mark.

That increased walk rate, it should be noted, is perhaps the biggest driving factor of this deal. Prior to the 2020 season, Cron had walked in just 5.5% of his career plate appearances. He walked nine times in just 52 plate appearances with Detroit before sustaining a season-ending knee injury, however, and the newfound patience largely carried over into the 2021 season. This year’s 11% walk rate effectively doubled his career mark and served to dramatically boost Cron’s offensive floor in the process. So long as the newfound plate discipline is here to stay, Cron ought to be a convincingly above-average bat over the next two seasons, even if he’s more of an average hitter on the road and a prodigious slugger at home.

Cron, like Senzatela, will be paid $7.25MM in each of the next two seasons. It’s a reasonable price to pay for a solid power bat who rates as an average or better defender at his position. From a bigger-picture standpoint, the Rockies now have about $61MM on next year’s payroll — a figure that’ll jump to about $82MM, assuming Charlie Blackmon exercises a $21MM player option. That’ll leave a pronounced gap between the currently projected payroll and the franchise-record $145MM mark, giving the Rockies some leeway to add to the roster under newly minted general manager Bill Schmidt.

Given the manner in which the open market has increasingly devalued free agents on the wrong side of 30, specifically first-base-only sluggers — there’s a reason Cron was effectively non-tendered twice, after all — one could argue that the Rockies shouldn’t have jumped the market. Taking a more patient approach could well have presented them with a “better” deal on a comparable player, or perhaps even a lower price tag on Cron. At the same time, they’ve now secured some cost certainty and ensured they’ll hang onto the specific person and teammate they clearly were targeting.

The broader issue for the Rockies will be one of how they supplement this roster next year. Extending Senzatela and Cron figure to be well-received moves among the Rockies’ fanbase, but all those moves accomplish for now is taking steps to ensure this same 74-win group can stay together. With Gray and Trevor Story both still ticketed for free agency — and Story widely expected to depart — the Rockies will need to add multiple pieces and/or see several big strides from young players just to get back to this year’s level of play. Actually improving the product and, more improbably, piecing together a contender that can jostle with the two best teams of the 2021 season (Giants and Dodgers) will require substantially more effort from Schmidt and his lieutenants.