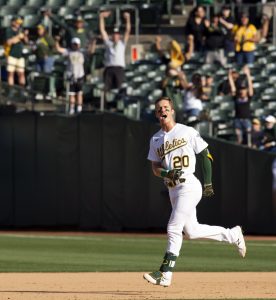 Canha becomes the second big addition of the day for the Mets, who also agreed to terms with infielder Eduardo Escobar on a two-year guarantee this afternoon. Canha will step into the club’s outfield mix, with the bulk of that time presumably coming in the corners. While he has experience in all three outfield spots, he’s never rated highly as a center fielder and has logged the plurality of his career innings in left field.

Public metrics like Statcast’s Outs Above Average and Defensive Runs Saved have been mixed on Canha’s corner outfield work over the past few seasons. There’s little question about his bat, though, as Canha has been an above-average hitter in each of the past four years by measure of wRC+.

Since the start of the 2019 season, the Berkeley product owns a .249/.377/.438 line over 1365 plate appearances. While he doesn’t have an eye-catching batting average, the right-handed hitter has walked in a fantastic 13.3% of his trips to the dish. That’s the 14th-highest rate among the 159 players with 1000+ plate appearances in that time. As a result, Canha’s on-base percentage is nearly sixty points higher than the league-wide mark over that span.

That ability to reach base may be Canha’s only standout skill, but it’s a highly valuable one for a Mets’ club that ranked sixteenth with a .321 mark this past season (excluding pitchers). And while Canha may not be elite at anything else, he’s a generally solid all-around player. His strikeout rates over the past few years have typically been a bit lower than the league marks. He owns a .189 ISO (slugging percentage minus batting average) since the start of 2019, which is slightly above par. Canha has done all that in one of the game’s more pitcher-friendly home environments, and his overall offense over the past three seasons checks in 29 percentage points above league average after accounting for park effects.

Canha was off to an especially promising start in 2021. In 325 plate appearances through June 25, he hit .255/.375/.450 with 11 homers. He suffered a left hip strain that landed him on the injured list at that point, an injury from which he didn’t seem to fully recover. While Canha returned in mid-July, he slumped to a .206/.340/.319 line over his final 300 plate appearances. A glance at his batted ball metrics seems to support that narrative. Canha’s average exit velocity before his IL stint sat at a solid 89 MPH; over his final few months, that mark dropped to 85.5 MPH.

The Mets are clearly of the belief that Canha’s power and overall offensive output will return to peak levels after an offseason to recover. His reported $13.25MM average annual value comes in a touch higher than MLBTR’s two-year, $24MM projected guarantee. Still, it’s a reasonable price for a player of Canha’s caliber and the Mets aren’t taking on much long-term risk. Canha turns 33 years old in February, capping the length of offers teams were willing to put forth.

Canha joins Brandon Nimmo as locks for regular playing time in the New York outfield next season. The Mets have various others who could play their way into the mix. Jeff McNeil and J.D. Davis could get bumped from a crowded infield mix into outfield work, while Dominic Smith, Khalil Lee and recent big league signee Nick Plummer could also see action. Still, there are enough moving parts that new GM Billy Eppler and his staff could continue to look for upgrades. Jon Heyman of the MLB Network tweets that New York still isn’t ruling themselves out of the market for free agent center fielder Starling Marte, for instance.

The specific breakdown of Canha’s deal has yet to be reported, but it’s likely to be another fairly significant addition to the Mets’ 2022 books. If both the Escobar and Canha deals were paid out evenly over the next two seasons, New York’s 2022 payroll would be pushing $207MM in the estimation of Jason Martinez of Roster Resource. The Mets’ estimated luxury tax commitments, meanwhile, are now up around $210MM (both figures including projected salaries for arbitration-eligible players).

It’s not entirely clear how far owner Steve Cohen is willing to push payroll, but it seem very likely they’ll at least be above this past season’s $195MM mark. Both Cohen and Eppler have talked about having ample financial flexibility, and the Mets remain on the hunt for additions to a rotation that has already lost Noah Syndergaard and could see Marcus Stroman depart. It’s already been an active first few days for Eppler in Queens, and it seems likely the Mets will continue to be busy as they try to snap a five-year playoff drought.

As for Canha’s former club, the A’s never seemed especially likely to make a strong run at bringing him back. Oakland is expected to conduct a significant roster overhaul this winter, with ownership seemingly mandating a drastic reduction in payroll. The A’s didn’t make Canha an $18.4MM qualifying offer, and shelling out a multi-year deal at an eight-figure annual salary would’ve registered as a major surprise.

Jeff Passan of ESPN first reported the Mets and Canha were nearing an agreement. Joel Sherman of the New York Post reported a two-year, $26.5MM guarantee had been agreed upon. Sherman also reported the presence of a 2024 option, which Jon Heyman of the MLB Network specified was a club option. MLB.com’s Anthony DiComo reported the salary breakdown of Canha’s contract.