The Tigers have a new catcher, announcing a deal this afternoon to acquire veteran Tucker Barnhart from the Reds. Infield prospect Nick Quintana is headed back to Cincinnati in return. 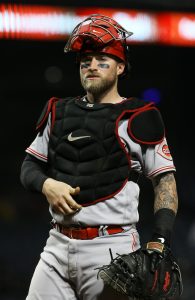 Barnhart had been a career-long member of the Reds, who selected him in the 2009 draft. The switch-hitting backstop made his MLB debut in 2014 and has served as Cincinnati’s primary catcher for much of the past seven seasons. Barnhart has established himself as a capable backstop on both sides of the ball, combining nearly league average offense for the position with well-regarded defense.

The 2021 season was generally par for the course for Barnhart, who hit .247/.317/.368 with seven homers over 388 plate appearances. That’s right in line with his career offensive marks, with his 81 wRC+ a few points shy of the leaguewide mark (89) for catchers. Barhnart’s greater value lies on the other side of the ball. Generally well-regarded as a game manager, he’s also posted above-average pitch framing metrics over the past few seasons after rating poorly in that regard early in his career. He’s also done well at controlling the running game, cutting down a strong 32.1% of base-stealers over the course of his career — although his 28.3% rate this past season was closer to average.

That kind of steady but unspectacular production on both sides of the ball holds value, but the Reds have looked likely to move on from Barnhart this winter for quite some time. 25-year-old backstop Tyler Stephenson hit .286/.366/.431 over 402 trips to the plate in 2021, and it’s apparent the Reds would like to give Stephenson everyday run. Barnhart remains controllable next season via a $7.75MM club option, but that seemed a bit higher than the Reds would be willing to pay for a #2 backstop. It stands to reason Cincinnati will look for a cheaper veteran option to complement Stephenson this winter.

Detroit, on the other hand, didn’t enter the offseason with an obvious answer behind the plate. Tigers’ general manager Al Avila acknowledged as much last month, and the front office struck on the first day of the offseason to address that need. The Tigers will certainly exercise that option, and he now looks likely to receive the bulk of playing time behind the plate in 2022. Dustin Garneau, Grayson Greiner, Eric Haase and Jake Rogers (when he returns from September Tommy John surgery) are also on hand as potential depth options, although it’s likely at least one of that group gets bumped from the roster now that Barnhart is in the fold.

Exercising Barnhart’s option will bring Detroit’s payroll up to around $94MM, including arbitration projections, in the estimation of Jason Martinez of Roster Resource. That’s already north of the club’s season-opening mark in 2021 but nowhere near the franchise record levels of spending. Avila and CEO Christopher Ilitch have already suggested the club would expand payroll this winter, and the Barnhart acquisition shouldn’t have much of an effect on Detroit’s pursuit of further upgrades around the diamond. The Tigers are widely expected to look for help at shortstop and in the starting rotation, and they’ve been often speculated upon as a landing spot for one of the top free agent shortstops hitting the market.

In exchange for parting ways with their longtime catcher, the Reds will pick up a 24-year-old third base prospect. The Tigers selected Quintana in the second round of the 2019 draft. Eric Longenhagen of FanGraphs called him a potential everyday third baseman over the 2020-21 offseason, but he’s since stumbled to a .196/.329/.346 line over 347 plate appearances in Low-A. The Reds will take a shot on a hopeful turnaround with a change of scenery, but the seemingly light return suggests that Cincinnati was likely to decline Barnhart’s option within the next few days had they not found a trade partner.

Jon Heyman of the MLB Network first reported the sides were nearing agreement on a trade. Chris McCosky of the Detroit News reported the deal was completed and Quintana’s inclusion.