The Phillies announced the signing of reliever Corey Knebel to a one-year contract this afternoon. It’s reportedly a $10MM guarantee. Knebel is represented by Excel Sports Management. 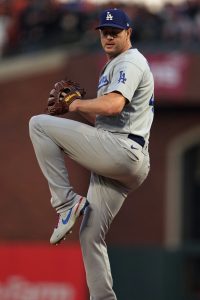 The bullpen has been a major weak spot for the Phillies in each of the last two seasons, and Knebel now provides some much-needed late-game help for the club, potentially even in the closer role.  Knebel has previous experience as the Brewers’ closer (including a 39-save, All-Star season in 2017) before injuries derailed his career.

Phillies president of baseball operations Dave Dombrowski is very familiar with Knebel, as back when Dombrowski was running the Tigers front office, Detroit selected Knebel 39th overall in the 2013 draft.  Knebel began his MLB career in a Tigers uniform, but after a pair of trades from Detroit to Texas to Milwaukee, he emerged as a very intriguing arm out of the Brew Crew’s bullpen.

Knebel underwent Tommy John surgery in March 2019 and returned to toss only 13 1/3 innings of rather shaky 6.08 ERA ball, though such struggles aren’t uncommon for a pitcher returning from such a layoff.  The Brewers opted to trade Knebel to the Dodgers rather than face the question of whether or not to tender him a contract in his final arbitration-eligible year, and to some extent, Milwaukee’s concerns were realized, as Knebel ended up missing almost four months of the 2021 campaign due to a right lat strain.

When he did pitch, however, Knebel looked much closer to his old form.  He posted a 2.45 ERA over 25 2/3 innings, with a 29.7% strikeout rate and 8.9% walk rate and dominant numbers against both right-handed and left-handed batters.  Velocity-wise, Knebel’s heater was back up to 96.4mph —- still a tick below his 97.4mph career high in 2017, but a nice step up from the 94.4mph velo he showed in 2020.  Knebel’s fastball spin rate also rebounded from 2020, and he posted a career-best spin rate on his curveball that topped his already-strong past numbers.

The contract is a nice late birthday present for Knebel, who turned 30 years old last week.  While he has already had a lot of ups and downs in his career, that age is a reminder that Knebel is still in his veritable prime, and might resume his status as a frontline relief arm if he is able to stay healthy.  The one-year contract may be a nod to both his lengthy injury history, and perhaps Knebel’s own desire to showcase himself in advance of a larger multi-year commitment next winter.  MLBTR projected Knebel for a two-year, $18MM pact, and he sat 38th on our ranking of the offseason’s top 50 free agents.

Knebel is by far the biggest of the Phillies’ bullpen adds this winter, topping a list that includes Ryan Sherriff, Nick Nelson, Yoan Lopez, Kent Emanuel, and Scott Moss.  The relief corps also took a hit when former closer Hector Neris departed to sign a free agent deal with the Astros.

Jeff Passan of ESPN was first to report the Phillies and Knebel were in agreement. Jim Salisbury of NBC Sports Philadelphia reported the sides were “in advanced talks” this morning. Jon Heyman of the MLB Network was first with contract terms.