Reliever AJ Ramos is retiring from professional baseball, he announced this afternoon (on Twitter). “Everyday you get to play/live truly is a blessing,” Ramos wrote as part of his statement. “The ability to enjoy the process is a big part of being successful because you soon realize that every setback or failure is just an opportunity to learn and get better. So I am thankful for my failures just as much as my success, beyond grateful for my time playing baseball.”

Ramos began his professional career as a 21st-round pick of the Marlins out of Texas Tech in 2009. Despite not being a high draft pick, the right-hander pitched his way to the majors within three years. Ramos made 11 appearances with the Fish late in the 2012 campaign, and he emerged as an important and effective late-inning option by the following year. 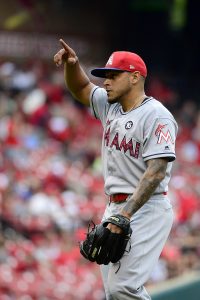 The 2013 season marked Ramos’ first of four straight seasons working at least 64 innings with an ERA no higher than 3.15. He held opponents to a pitiful .194/.303/.277 slash line over that stretch, allowing a cumulative 2.64 earned runs per nine. The Lubbock native punched out 27.4% of batters faced at a time when the league-wide strikeout rate for bullpen arms was about five points lower. Ramos emerged as Miami’s closer by 2015 and he was selected to the All-Star game during a 40-save 2016 campaign.

Miami traded Ramos to the division-rival Mets in advance of the 2017 trade deadline. His numbers ticked down in Queens, particularly in 2018. He never seemed fully healthy that season, and he was diagnosed with a labrum tear in his throwing shoulder that June. That required season-ending surgery, one from which Ramos didn’t appear to ever fully recover.

After missing all of the 2019 campaign rehabbing, Ramos announced he was attempting a comeback in July 2020. After successive stints with the Dodgers and Cubs didn’t result in a big league look, he was rewarded for his perseverance with a late-season return to the majors as a Rockie. He signed a minor league contract with the Angels last season, and Los Angeles brought him up for the final week of the year.

Ramos returned to the Anaheim organization on another minors pact this offseason. Unfortunately, he suffered a torn capsule in his shoulder last week. Ramos quipped in his retirement announcement that he “gave it (his) all until (his) arm gave out … then threw two more pitches just to make sure.” It’s certainly not how the 35-year-old would’ve wanted his career to wrap up, but there’s no question he had a successful run.

Altogether, Ramos appeared in parts of nine big league seasons, working 373 1/3 innings across 381 games. He struck out 430 hitters, saved 99 games, held 46 more leads and posted a 3.04 ERA. Ramos had a four-year stretch as one of the more quietly effective relief arms around the sport, and while injuries plagued the late stages of his career, he was rewarded for his comeback efforts with late MLB looks in each of the last two years. MLBTR congratulates Ramos on his career and wishes him the best in retirement.