Jose Ramirez won’t be going anywhere. The star infielder has agreed to a new five-year extension with the Guardians that will see his 2023 club option picked up and another five seasons and $124MM tacked onto his contract, reports ESPN’s Jeff Passan. Ramirez’s contract now runs through 2028 and contains a full no-trade clause as well, all but ensuring that he’ll remain in Cleveland for the long haul. The Guardians did explore trade scenarios while simultaneously discussing an extension, Passan adds, noting that the Padres in particular believed they had a chance to pry him away. Ramirez is represented by Repulik Sports. 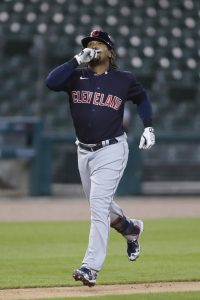 The new contract is the largest in franchise history but will still be regarded as a club-friendly deal. Ramirez has emerged as one of the game’s elite players at a time when annual salaries well north of $30MM have become commonplace, but the switch-hitting 29-year-old has been “adamant” about his desire to remain in Cleveland during negotiations, tweets Zack Meisel of The Athletic. Ramirez was already set to earn $12MM this year, and next year’s now-exercised option came with a $14MM value, so he’ll now be guaranteed a total of $150MM over the next seven seasons.

Prior to this new deal with Ramirez and this week’s extension of closer Emmanuel Clase, the Guardians didn’t have a single dollar committed to the payroll beyond the 2022 season. Locking up Ramirez now puts any near-term trade chatter to bed and sets him up to serve as a focal point in the lineup through what will be his age-35 season. Ramirez’s contract clocks in south of the $151MM extension signed by Altuve at a similar juncture of his career and well shy of Nolan Arenado’s $234MM extension with the Rockies (although Arenado was just months from free agency, whereas both Altuve and Ramirez were controlled through the upcoming season and one more via an affordable club option). Maxing out his annual salary doesn’t appear to have been as large a priority as staying with the team that originally signed and developed him, however, and Ramirez’s new deal obviously offers more than a lifetime’s worth of financial comfort.

It’s a major win for the Guardians and their fans to keep Ramirez locked in as the face of the franchise as the team kicks off a new era in its franchise history. Trading Ramirez just one year after trading away Francisco Lindor and just months after a name change/rebranding that was far from universally praised by the fan base would’ve been a tough pill for many longtime Cleveland fans to swallow.

Instead, Ramirez will continue to show off his electric brand of across-the-board excellence at Progressive Field for more than a half decade. While he first broke out as an above-average player back in 2016, it was the 2017 season that saw Ramirez jump into the ranks of MVP-caliber talents — and he hasn’t looked back since. Dating back to 2017, Ramirez boasts a .280/.365/.547 batting line (39 percent better than league average, by measure of wRC+) with 144 home runs, 112 stolen bases (in 134 attempts) and strong defense at both third base and second base. There’s virtually no flaw in Ramirez’s game — evidenced by the fact that he trails only Mike Trout and Mookie Betts in total Wins Above Replacement, per FanGraphs, since 2017.

The extensions for Ramirez and Clase come at a time when the Guardians are set to welcome a wave of high-end young talent to a roster that is, once again, deep in talented young pitchers. Shane Bieber, Aaron Civale, Triston McKenzie, Zach Plesac and Cal Quantrill give Cleveland a strong collection of big league rotation pieces, and touted righty Daniel Espino isn’t far behind that quintet. On the position-player side of things, outfielder George Valera and infielders Brayan Rocchio, Tyler Freeman, Gabriel Arias and Nolan Jones (who’s also seen time in the outfield) could all be up in the big leagues by 2023 — some of them as soon as during the 2022 season.

That collection of young talent simultaneously gives Cleveland good cause to lock Ramirez into place and also provides the typically low-payroll club the ability to dedicate a significant portion of its annual budget to one player in just this manner. The Guardians will need to make a similar decision on their ace, Bieber, before too long, as he’s controlled another three seasons and will see his price tag continue to mount through the arbitration process.

With Ramirez putting pen to paper on a second club-friendly extension, however, it stands to reason that the team has a bit of extra leeway in trying to piece together an extension for the 26-year-old right-hander. The Marlins’ five-year, $56MM for Sandy Alcantara is the largest ever extension for a pitcher in Bieber’s service bracket. If the team waits until next year, the extension record for that four-plus service bracket jumps considerably; Jacob deGrom signed a five-year, $137.5MM deal in that same bracket. Bieber won’t have quite that same earning capacity, as deGrom was a Super Two player whose second-year arb price had already soared to $17MM — Bieber is not Super Two-eligible and is earning $6MM in his first year of arb in 2022 — but the gap in those two records still serves to illustrate the likely hike in Bieber’s eventual price tag.

Regardless of whether Cleveland keeps Bieber, goes year-to-year or even eventually considers trading him, the Guardians’ future looks quite a bit brighter with Ramirez now etched firmly into cornerstone status. And if the team prefers not to spend big money to keep Bieber in place alongside him, that’ll only further allow the front office to make some free-agent investments to supplement the burgeoning young core. It’s not likely that we’ll ever see Cleveland dive headlong into the deep end of the free-agent pool, of course, but some second-tier spending to surround Ramirez and whichever of the team’s prospects emerge as regulars will eventually be required if the Guardians hope to keep pace in an increasingly competitive AL Central.

The White Sox are currently the AL Central favorites, due in no small part to their own exciting young core and some key investments in veterans on the free-agent and trade markets. The Twins, meanwhile, have a series of young pitchers on the cusp of the big leagues and shocked the baseball world with their offseason signing of Carlos Correa, which firmly signaled there’s no intent to rebuild after a lost year in 2021. Detroit and Kansas City are both emerging from longstanding rebuilding efforts themselves and are set to welcome some of the sport’s premier prospects to the Majors when the season opens (Spencer Torkelson in Detroit, Bobby Witt Jr. in Kansas City).

The shifting landscape in the Central makes it all the more pivotal for the Guardians to not only retain Ramirez but to succeed with their own player-development efforts and to spend at least some money to supplement that group. Cleveland will probably always have the division’s lowest payroll, at least when all five Central clubs are aiming to contend, but successfully bartering a team-friendly extension with a superstar talent of Ramirez’s caliber helps to narrow the the edge that other division rivals may have in terms of their overall financial resources. Beyond that, a long-term deal for a face-of-the-franchise player of this nature is cause for any team’s fan base to celebrate. Ramirez jerseys ought to be flying off the shelves now in Cleveland, as Ramirez could spend the next seven seasons looking to add to his already-impressive collection of three Silver Sluggers, three All-Star nods and four top-six MVP finishes.