The Orioles announced that they have selected the contract of top prospect Adley Rutschman. Anthony Bemboom has been designated for assignment in a corresponding move.

Of course, this is a day that baseball fans in Baltimore and elsewhere have been looking forward to for quite some time. Even before he was a member of the Orioles organization, Rutschman was tantalizing the baseball world with his performance at Oregon State, shooting up draft boards and considered by many to be the top player available in the 2019 draft. Baseball America, for instance, gave him the #1 slot that year, with their report noting that the switch-hitting catcher had essentially every skill necessary to succeed going forward. Hitting for average, hitting for power, taking walks, strong arm, good receiving and blocking, he had all the tools except speed, which is hardly surprising for a catcher. “He is the best catching prospect since Buster Posey in 2008 and Matt Wieters in 2007,” their report concluded.

Although there were reports that the O’s were considering other players with the first overall selection in the 2019 draft, such as Bobby Witt Jr., Andrew Vaughn and JJ Bleday, it never seemed like there was much chance of anyone usurping Rutschman. When the big day finally rolled around, Rutschman was indeed the first player off the board. 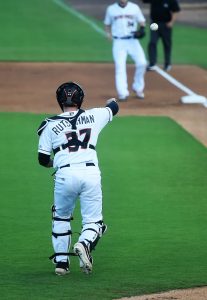 Due to the struggles of the big league club, Rutschman instantly became the light at the end of the tunnel for Baltimore fans. The Orioles finished last in the AL East in both 2017 and 2018, and were in the process of repeating that feat when Rutschman was drafted in 2019. They somehow slipped past the Red Sox and into fourth place in the shortened 2020 season, but were back down in the basement in 2021, and also posted the worst record in baseball again (tied with the Diamondbacks). That means they have the first overall selection in the draft yet again this summer. With nothing inspiring happening at the big league level, all hopes were pinned on the stars in the farm system that would make up the next great Orioles team, with Rutschman being front and center.

Baseball America ranked Rutschman the fifth-best prospect in all of baseball in 2021, then bumping him up to #2 last year and #1 this year. He’s also considered the best prospect in baseball by FanGraphs, ESPN’s Kiley McDaniels, and The Athletic’s Keith Law.

It’s been an atypical rise through the minors for the 24-year-old. It started out normal enough, with Rutschman getting into 37 games in the lower levels of the Orioles’ system in the months after the draft. But the pandemic wiped out the minor leagues in 2020, meaning he wasn’t able to play in any official organized games. But that missed season didn’t slow him down any, as his 2021 proved the hype was for real. In 123 games between Double-A and Triple-A, he hit 23 home runs and produced an overall batting line of .285/.397/.502, walking at a 14.5% rate and striking out only 16.6% of the time. That all adds up to a wRC+ of 144, or 44% better than league average.

The Orioles did little to block his path to the big leagues this offseason. The catchers who got playing time behind the plate in 2021 were all jettisoned from the roster. Pedro Severino, Austin Wynns and Nick Ciuffo were all outrighted at season’s end and Chance Sisco was claimed off waivers by the Mets. There was a time in the offseason that the club actually had no catchers on the 40-man roster, although they eventually signed Robinson Chirinos to be in the mix.

Once the new collective bargaining agreement was agreed to and the lockout ended in March, it seemed there was a chance Rutschman could crack the Opening Day roster. The new CBA featured incentives to try and discourage teams from holding their best prospects down in the minors at the beginning of a season in order to manipulate their service time and gain an extra year of control over their services. Unfortunately, Rutschman suffered a triceps strain in mid-March that put him on the shelf for a few weeks, ending any chance of him being ready for the season opener. After recuperating from that injury, he made his 2022 debut in the minors on April 26 and has spent the past four weeks getting back into game shape. In 19 games this year across three different levels, he’s hitting .309/.427/.515, 159 wRC+, walking in 13.4% of his plate appearances while striking out in just 8.5% of them.

There are about 137 days remaining in the season, meaning he will be unable to accrue the 172 days necessary to count as a full year. There is a provision in the new CBA that grants a full year of service time to the top two finishers in Rookie of the Year voting, though it will be difficult for Rutschman to take that path now, given that his competitors in that race have a six-week headstart on him. Jeremy Pena has already produced 1.8 fWAR, while other prominent rookies like Bobby Witt Jr. and Julio Rodriguez have 0.8 fWAR during their first MLB seasons.

Assuming Rutschman isn’t able to catch up and finishes this season with less than a year of service time, the O’s will control his services through the 2028 season, though he does have a very good shot at qualifying for arbitration after the 2024 season as a Super Two player. (The Super Two cutoff moves from year to year but has only been above 2.137 three times since 2009, with the last instance coming back in 2012.) Now that he’s reached the big time, the club will be hoping that he and the other prospects that are still to come will help the Orioles start turning the page from rebuilding to competing over those coming years.

With Rutschman injured to start the year, the club selected Bemboom’s contract, pairing him with Chirinos as the club’s catching duo. In 22 games on the year, he’s hit a meager .115/.207/.212. Since he’s out of options, the club had little choice but to designate him for assignment in order to make room for their star prospect. Bemboom will likely hit the waiver wire in the coming days and see if there’s another club in the league that’s interested in his services.