The Marlins are 7-3 over their past ten games, though the resulting 27-31 record still lands them 11 games out of first place in the National League East and 5.5 games back of a Wild Card spot. Starting pitching, as one would expect for a team with this type of rotation talent, has helped to drive the recent surge. Arguably the biggest catalyst in Miami’s recent surge, however, has been the first baseman/outfielder who’s carried the offense of late: Garrett Cooper. The Marlins recently placed Cooper on the Covid-19-related injured list, but he was hitting .500/.548/.714 through 31 plate appearances amid their recent uptick in play. 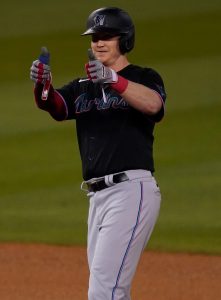 If Cooper’s production happened to be a complete anomaly, perhaps it wouldn’t bear much of a mention. Players go on hot streaks all the time, after all. But while Cooper can’t be expected to continue hitting .500 over any meaningful sample, the recent burst should help to shine a light on the fact that the 31-year-old is among the game’s most underrated bats and has been for some time now. Cooper’s sweltering June isn’t any sort of breakout from a slow start to the year; he entered the month hitting .277/.360/.426 and now, after a recent string of six consecutive multi-hit games, is up to .315/.389/.473 on the year.

By measure of wRC+, Cooper has been about 47% better than a league-average hitter so far in 2022 (after weighting for park and league) — his fourth year as a regular in the Marlins’ lineup and his fourth with above-average overall production. Cooper was a solid hitter back in 2019 (.281/.344/.446, 15 home runs, 111 wRC+), but that came in the juiced-ball season, making it easy to overlook the manner in which he established himself. Since that time, he’s maintained a solid walk rate while hitting for average and showing above-average power. The output has come during the shortened 2020 season and an injury-plagued 2021 campaign, which may have prevented it from getting the attention it should have, but Cooper has been one of baseball’s best hitters on a rate basis dating back to 2020.

In that time, Cooper ranks 20th among 265 big league hitters (min. 500 plate appearances) with a 138 wRC+. He’s hitting .295/.377/.476 during that stretch. Of the 19 hitters ranked above him, 17 are former All-Stars, with the exceptions being Kyle Tucker and Ty France — both likely (or at least deserving) 2022 All-Stars. The top 30 names on that leaderboard represent a veritable who’s who of baseball’s most notable bats, with Cooper quietly lumped into the middle of the group. However, it’s unlikely many would think of Cooper when trying to list off the game’s most productive hitters. He may not even be the first Marlin to spring to mind for most, not with Jazz Chisholm Jr.’s outstanding showing so far in 2022.

The lack of recognition for Cooper may not be that difficult to explain. He plays for a Marlins team that struggles to draw fans to the park and has just one winning season since 2010 (when they reached the expanded playoffs with a 31-29 record in the shortened 2020 campaign). Cooper hasn’t produced at this level over the course of a full big league season yet — though his production since 2020 has come over the life of 594 plate appearances, which is nearly a full year’s worth of reps. He also missed time with both a lumbar strain and an elbow sprain last year and has only appeared in 100 games in a season once.

It’s tempting, then, to wonder whether Cooper’s production is fluky in nature or attributable to small sample sizes. That doesn’t appear to be the case. The league-average exit velocities over the past three seasons have been 88.4 mph, 88.8 mph and 88.7 mph, respectively. Cooper, in  that time, has posted respective exit velos of 90.1 mph, 91.1 mph and 91.6 mph. His 47.2% hard-hit rate (the percentage of batted balls at 95 mph or more) trounces the league average of 38.3%. He’s “barreled” 10.7% of his batted balls in that time, per Statcast — handily topping the 7.8% MLB average.

There’s a platoon split of note with regard to Cooper, but that’s not to say he is or should be considered a platoon player. Rather, it’s just that since 2020, the right-handed-hitting Cooper has been a very good hitter against fellow righties (.279/.370/.437) and one of the very best in the game against lefties (.336/.398/.575). He’s been a legitimate middle-of-the-order presence regardless of opponent.

Although Cooper has only connected on four home runs through 211 plate appearances so far this season, one could still argue that the 2022 campaign has been his best yet. This year’s 23.2% strikeout rate is the lowest of his career, and his 15 doubles are one off the career-high 16 he smacked in 2019 — in more than twice as many trips to the plate. Cooper is sporting a .403 batting average on balls in play this year, and while that’s sure to regress to an extent, there’s no reason it should be expected to plummet to the .288 league average. Cooper entered the year with a career .362 BABIP, and even though it’s fair to be skeptical he can sustain quite that level, a player with Cooper’s hard-contact profile should carry a BABIP considerably greater than that of the average hitter. Statcast pegs his “expected” batting average in 2022 at .301 — only 14 points lower than its current mark.

Meanwhile, only 10.8% of Cooper’s fly-balls have left the yard for homers this year — a mark well shy of the 21.6% rate at which he entered the season. His 2022 rate will likely begin to move closer to that career level, meaning his slugging can reasonably be expected to tick upward even as his average likely moves south.

At 6’5″ and 235 pounds, Cooper’s defensive options are limited to first base and the outfield corners. He’s rated poorly on the grass (-4 Defensive Runs Saved, -5 Outs Above Average in 615 career innings), but defensive metrics view Cooper as a sound, if unspectacular option at first (4 DRS, 5 OAA, 2.9 Ultimate Zone Rating in 1157 innings). With Jesus Aguilar also on the roster, Miami has given Cooper plenty of time at designated hitter, too.

Aguilar has a 2023 mutual option and will likely be a free agent at season’s end — mutual options are rarely exercised by both parties — which at least ostensibly opens the door for Cooper to step in as the everyday first baseman in 2023 That could happen even sooner, if Aguilar is moved on this summer’s trade market. Then again, Cooper himself figures to see his name pop up in trade rumblings, at least if the Marlins aren’t able to further close the gap in the Wild Card standings.

Cooper himself is only controlled through the 2023 season, and with his 32nd birthday looming in December, he’s something of a late bloomer relative to other big leaguers. The Marlins would surely love to keep his bat in the lineup now that they’ve turned more toward a win-now approach, but Cooper’s bat should be a coveted attribute this summer as contending clubs look to beef up their lineups. Because of the time missed due to injury, Cooper’s arbitration price hasn’t built up too extensively; he’s earning an eminently reasonable $2.5MM in 2022. That makes him affordable for any team, and the advent of the universal designated hitter will only further broaden Cooper’s market.

There’s no guarantee the Marlins will seriously entertain offers on Cooper — or on any of their veteran players, for that matter. They’re by no means completely out of the playoff picture, and with 10 of their next 13 games coming against divisional opponents (three in Philadelphia and seven against the Mets), they have a very immediate opportunity to climb the NL East ladder and make things more interesting.

A poor showing, however, will have the opposite effect and will only magnify the pressure to at least listen on some short-term veterans. And while rental bats like Josh Bell, Nelson Cruz, Willson Contreras, Trey Mancini and Andrew Benintendi will draw more headlines as the trade deadline looms, Cooper might draw more actual trade interest, given his affordable salary, extra year of club control and comparable (if not superior) production.