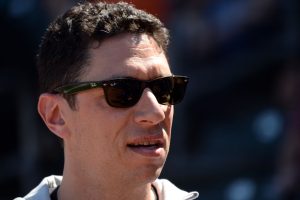 “This morning I informed Jon Daniels that his contract would not be renewed at the end of the season and that he is being relieved of his duties effective immediately,” managing partner Ray Davis said in a press release announcing the move. “Jon’s accomplishments in his 17 years running our baseball operations department have been numerous. He and his staff put together the best teams in this franchise’s history that resulted in five playoff appearances and two American League pennants between 2010 and 2016. His impact on the growth of our player development, scouting, and analytics groups has been immense. Jon has always had the best interests of the Rangers organization in mind on and off the field and in the community.

“But the bottom line is we have not had a winning record since 2016 and for much of that time, have not been competitive in the A.L. West Division. While I am certain we are heading in the right direction, I feel a change in leadership of the baseball operations department will be beneficial going forward.”

Daniels had been atop the Rangers’ baseball operations hierarchy since way back in 2005, when at just 28 years of age he became the sport’s youngest general manager. Prior to today’s ousting, he was the sport’s third-longest-tenured baseball ops leader, trailing only Athletics executive vice president Billy Beane and Yankees general manager Brian Cashman.

As Davis alluded to, Daniels oversaw some of the finest years in Rangers franchise history, including a pair of back-to-back World Series appearances in 2010-11. Those teams thrived in no small part due to savvy trades made by Daniels. His blockbuster deal sending Mark Teixeira to the Braves (in exchange for shortstop Elvis Andrus, 2010 AL Rookie of the Year Neftali Feliz, catcher Jarrod Saltalamacchia and lefty Matt Harrison) and Daniels’ acquisitions of Josh Hamilton (from the Reds in exchange for Edinson Volquez) and Nelson Cruz (from the Brewers for Carlos Lee) helped set the stage for those halcyon days in Arlington.

The success carried  into the mid-2010s, as Texas won the AL West and enjoyed a 97-win season back in 2016. That came on the heels of some other high-profile moves — e.g. signing Yu Darvish and Adrian Beltre, acquiring Cole Hamels — which led to multiple contract extensions for Daniels over the years. Since that time, however, ill-fated signings have begun to mount while what should have been pivotal trades have failed to bear fruit.

The 2014 signing of Shin-Soo Choo to a seven-year, $131MM contract ultimately proved to be a misstep, for instance, and shorter-term deals for veterans like Andrew Cashner and Carlos Gomez also came up empty. Texas’ 2016 acquisition of Jonathan Lucroy went south in 2017, and the Rangers ultimately received little to no value in trades of production veterans such as Yu Darvish and Mike Minor, which further set the farm system back. Meanwhile, homegrown talents projected for stardom never achieved those ceilings; Nomar Mazara, Martin Perez, Leody Taveras, Hans Crouse, Willie Calhoun (acquired for Darvish) and Chi Chi Gonzalez are among the many former Top-100 Rangers prospects who never really developed into impact players (though Perez’s 2022 breakout has at least finally changed the narrative on him to an extent).

That difficulty regarding player development wasn’t unique to the organization’s very best prospects, either. Rather, Texas’ ability to develop big leaguers through the draft has simply stalled out in recent years. Incredibly, not one member of the Rangers’ 2018-21 draft classes has reached the Majors yet. Dating back to 2016, right-hander Joe Barlow is the only player drafted by the Rangers to produce even 1.0 wins above replacement in the Majors.

Certainly, that doesn’t all fall solely on Daniels’ shoulders. The Rangers have had scouts, analysts and dozens of other executives contributing to those collaborative processes throughout that dry period, but as general manager (and eventually president of baseball operations), Daniels was the final call both on baseball operations decisions, on filling out the scouting and player development ranks, etc.

Speaking of general managers — those duties will now all fall to Young, the 43-year-old former big league pitcher who has rapidly ascended into the game’s executive ranks following the conclusion of a 13-year Major League career. A Princeton product, Young was always touted as one of the sport’s brightest baseball minds, even during his playing days. He broke into executive work not with a team but working in Major League Baseball’s offices, where he served as the league’s senior vice president of on-field operations, initiatives and strategy.

Young was tabbed as the new Rangers’ general manager in somewhat out-of-the-blue fashion in Dec. 2020. It was his first post working in a Major League front office, but the Rangers weren’t the only club with interest. The Mets, in owner Steve Cohen’s first offseason at the wheel of the team, had interest in interviewing Young for their own GM vacancy. He interviewed for the post but withdrew his name from consideration, citing the fact that he did not want to move his family from Dallas to New York as the key factor in that decision. A week later, the Rangers announced his hiring.

Young may not have the typical resume most up-and-coming executives bring to the table, but he’s spent the past two years learning under Daniels — who, for all the Rangers’ recent struggles, remains one of the game’s most widely respected executives. That experience will prove vital as Young now sets forth to execute his own vision for the franchise.

Daniels, meanwhile, would surely be a welcome addition to countless baseball ops departments around the game, though it’s not yet clear whether he’ll immediately pursue another position or whether he’ll step back and take some time with his family after a near two-decade grind leading the Rangers. He’s been tied to his hometown Mets in the past, and there will be at least one GM vacancy this offseason now that the Tigers have fired Al Avila. Time will tell, but Daniels should have little trouble finding a new role if he’s so inclined — though for the time being, it may not be running his own department.