November 9: The Mets have officially announced the deal. Joel Sherman of the New York Post has more details on the deferred money, noting that it will be $5.5MM per year for the first three seasons and then $5MM per year for the last two. This means his CBT number will be $18.6MM (Twitter links).

November 6: The Mets have kicked off the off-season in spectacular fashion, inking superstar closer Edwin Diaz to a record-breaking five-year, $102MM deal. The deal comes with a $12MM signing bonus, full no-trade clause and has a team option for a sixth year which could take the total value of the deal to $122MM. Diaz will also have the ability to opt out of the contract after the third season, when he’ll be approaching his age-32 season. $26.5MM of Diaz’s salary is deferred. Diaz is represented by the Wasserman Agency.

The contract takes one of the top free agents off the board before free agency opens on Thursday afternoon, and it also sets a new standard as the biggest contract even given to a relief pitcher in terms of both total value and average annual value. Aroldis Chapman’s five-year, $86MM contract was the previous benchmark for total value, while Liam Hendriks’ ongoing three-year deal with the White Sox had given him the previous AAV high of $18MM.

Diaz, 28, was lights out for the Mets in 2022, tossing 62 innings of 1.30 ERA ball. He struck out more than half of the batters he faced, while walking just 7.7% of batters. He gave up just three home runs all year, and converted 32 of his 35 save opportunities. His fastball/slider combo has always been a nightmare for opposition batters, but he leaned far more heavily on his slider in 2022, going to it 58.1% of the time against his usual usage in the mid-30s, and the results were staggering. He led the majors in reliever ERA, strikeout rate and reliever fWAR. The strikeout rate was so dominant it tied Craig Kimbrel’s 2012 effort for the third best strikeout rate of qualified relievers in MLB history. Only Aroldis Chapman’s 52.5% mark in 2014 is better, but that came against an 11.9% walk rate, well above Diaz’s rate this season.

Though Diaz established himself as the best reliever in baseball this season, the deal does present a fair degree of risk particularly given Diaz’s career as a whole has been something of a roller-coaster. After being drafted in the third round of the 2012 draft by the Mariners, Diaz emerged as powerhouse arm out of Seattle’s bullpen. He averaged a 2.64 ERA over three seasons in Seattle, highlighted by a phenomenal 2018 season that saw him notch 57 saves, while posting a 1.96 ERA and finishing eighth in AL Cy Young voting. That prompted the Mets to acquire him that off-season, sending over their own top prospect Jarred Kelenic and taking on the bulk of Robinson Cano’s hefty contract to get him. That off-season blockbuster also featured Jay Bruce, Anthony Swarzak, Justin Dunn and Gerson Bautista.

The deal looked a shocker initially, as Diaz pitched to a 5.59 ERA in his first season in Queens. He maintained his strong strikeout rates, but struggled mightily with the long ball, giving up an average of 2.3 home runs every nine innings. He could have been an outside non-tender candidate that winter, but the Mets stuck with him, and their decision paid off immediately. Diaz bounced back in the 2020 pandemic-shortened season, curing his long ball problems and posting the best strikeout rate at that point of his career. He experienced a slight dip in 2021, posting a 3.45 ERA, although advanced indicators such as FIP suggested his performance was largely in line with his previous season (2.48 in ’21 against 2.18 in ’20). 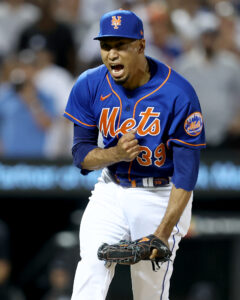 Diaz has become a legitimate superstar of the sport in Queens. His performance speaks for itself, but his entrance to trumpets at Citi Field captivated all of sports and sparked a number of other theatrical entrances that look to mimic the atmosphere that Diaz’s entrance creates. While no reliever is a sure thing, Diaz is the best in the game at what he does, and Mets owner Steve Cohen has shown a willingness make money a non-issue when it comes to signing, or in this case re-signing, the game’s top talent.

It’s the first move in what could be a busy off-season for the Mets. Both their rotation and bullpen will significant addressing. Diaz was set to join Tommy Hunter, Adam Ottavino, Joely Rodriguez, Trevor May, Seth Lugo and Trevor Williams as relievers headed for free agency, while Mychal Givens has a mutual option for next year, meaning they effectively have to rebuild their bullpen entirely. Diaz is a major piece of that, but the Mets will still be heavily active in the relief market this winter. On the rotation side of things, Chris Bassitt has already declined his mutual option and will be a free agent, while Jacob deGrom is expected to confirm he’ll opt into free agency in the coming days. Taijuan Walker has a $7.5MM player option with a $3MM buyout, while Carlos Carrasco has a $14MM club option with a $3MM buyout, so the team could be seeking a number of starters as well. That’s not even getting into the offensive side of the ball, where the Mets will lose outfielders Brandon Nimmo and Tyler Naquin.

It shapes up as another busy off-season, and one which could see the Mets payroll soar to even greater heights. Cohen has never seemed too concerned with the payroll, but RosterResource has the Mets payroll at $251MM for 2023 currently, although that figure doesn’t assume deGrom will opt out. Even so, the team spent $282MM in 2022 on player payroll, and there’s definitely a path to them spending that or more in 2023 if they’re serious about competing in the tough NL East.

Bob Nightengale of USA Today was first to report that Diaz and the Mets were close to a deal. Jeff Passan of ESPN was first to report the deal was done and included an option, opt-out and no-trade clause. Tim Healey of Newsday had financial details of the option year and the time of the opt-out. Ken Rosenthal of The Athletic had details of the signing bonus, while SNY’s Andy Martino reported about the deferred money.