DECEMBER 9, 9:22am: Williams will be guaranteed a total of $13MM, Stephen J. Nesbitt of The Athletic reports (via Twitter).

8:54am: The Nationals are in agreement on a two-year contract with free-agent righty Trevor Williams, reports Mark Zuckerman of MASNsports.com (via Twitter). Williams is represented by John Boggs & Associates. 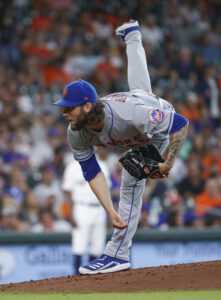 Williams, 31 in April, has spent the past season and a half with the Mets, pitching to a 3.17 ERA in 122 innings while splitting his time between the rotation (12 starts) and bullpen (28 appearances). He’d previously spent the bulk of his career as a starting pitcher, highlighted by a 31-start, 170 2/3-inning season of 3.11 ERA ball with the Pirates back in 2018. However, Williams has yet to consistently sustain that level of success over the course of multiple seasons.

Williams works with a traditional starter’s repertoire, leaning primarily on a four-seam fastball and complementing that with a sinker, slider and changeup that were all used at roughly equal levels in 2022 (plus a much more seldom-used curveball). None of those pitches generate huge spin, and none but the slider come with standout whiff rates. Still, Williams regularly excels at limiting hard contact, with above-average marks in exit velocity and hard-hit rate throughout the majority of his career to this point.

Zuckerman suggests that Williams could well end up in the Nationals’ rotation, but that’s not yet set in stone, and a return to the swingman role in which he’s thrived with the division-rival Mets is possible. At present, the Nats have a pair of albatross contracts atop the rotation in Stephen Strasburg and Patrick Corbin, and that pair will be followed by some combination of Josiah Gray, MacKenzie Gore, Cade Cavalli and perhaps Williams. Given Strasburg’s avalanche of recent injury troubles, plus the uncertainty surrounding inexperienced arms like Gore and Cavalli, there ought to be ample rotation innings available even if Williams initially begins the season in the bullpen.

Williams is the second free-agent addition of the winter for the Nats, who also inked corner infielder Jeimer Candelario to a one-year, $5MM contract last month. Washington has a projected payroll of about $106MM next season, though the bulk of that is tied up in their onerous commitments to Strasburg and Corbin. Strasburg is still signed through the 2026 season, while Corbin is signed through 2024.