December 8: Robert Murray of FanSided provides the specific contract breakdown. Martin will make $6MM in 2023 and $7.5MM in 2024, in addition to a $4MM signing bonus.

December 2: The Red Sox and reliever Chris Martin are in agreement on a two-year deal, according to Jeff Passan of ESPN. The deal is pending a physical and will be worth $17.5MM.

Martin, 37 in June, has had one of the more unique baseball trajectories. As detailed in this 2019 piece from Tim Tucker of the Atlanta Journal-Constitution, Martin had shoulder surgery in 2006 that he thought was the end of his career. Years later, he was working for Lowe’s and UPS and discovered during a game of catch with friends that his shoulder didn’t bother him anymore. 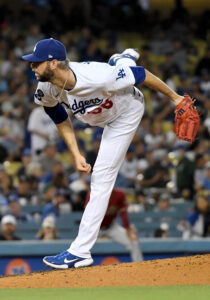 He got back onto the mound and worked his way to the big leagues, pitching a couple of seasons in 2014 and 2015 before heading to Japan for 2016 and 2017. He returned to the majors for 2018 and has spent the past five seasons as an effective middle reliever with perhaps the best control in the league. Martin has walked just 2.8% of batters faced in that time, the best such rate of any pitcher with at least 200 innings pitched.

This year was no exception. He began the year by signing a one-year deal with the Cubs for $2.5MM plus incentives. Through 31 1/3 innings in Chicago, his ERA was an unimpressive 4.31 but with much stronger peripherals. His 30.1% strikeout rate, 3% walk rate and 52.3% ground ball rate were all much better than league average. However, his ERA was being inflated by a .393 batting average on balls in play and by 20.8% of his fly balls allowed leaving the yard.

The Dodgers believed some regression was due and sent Zach McKinstry to the Cubs in order to install Martin in their bullpen down the stretch. The results were utterly dominant, as Martin pitched to a 1.46 ERA, striking out 37% of batters faced while walking just 1.1%. He also added another two innings of postseason work without issuing a walk.

Based on that strong season, MLBTR predicted he could secure a two-year, $14MM deal, but Martin has nudged past that by a few million. The relief market has been quite strong so far this winter, with Martin and Rafael Montero both beating their predictions by healthy margins.

The bullpen was a weak spot for Boston in 2022, as their relievers posted a collective ERA of 4.59, 26th in the majors. They also lost one of their effective members to free agency in Matt Strahm. They’ve since made moves to try and bolster the relief corps by singing Joely Rodriguez and now Martin. Assuming the money is evenly distributed in two instalments of $8.75MM, Roster Resource has their 2023 payroll currently at $142MM with a competitive balance tax calculation of $161MM.