10:41am: There’s no option on the contract, tweets Joel Sherman of the New York Post, adding that Kahnle will be paid $5.75MM in each of the next two seasons.

10:32am: The Yankees have agreed to a two-year deal with free-agent reliever Tommy Kahnle, reports Ken Rosenthal of The Athletic (Twitter link). Kahnle, a client of the Ballengee Group, will be guaranteed a total of $11.5MM on the deal, tweets Jon Heyman of the New York Post. Kahnle was reported to be in “advanced” talks with multiple clubs earlier this morning, and Alex Speier of the Boston Globe tweets that the archrival Red Sox also made a two-year offer to the right-hander. 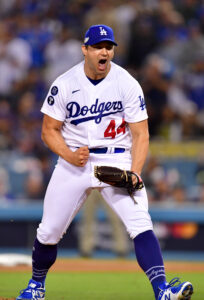 Kahnle, 33, returns to the same Yankees team that drafted him in 2010, lost him to the Rockies in the 2013 Rule 5 Draft, and eventually acquired him alongside David Robertson in a 2017 trade with the White Sox. Injuries, most notably 2020 Tommy John surgery, put an end to Kahnle’s time in the Bronx. He was waived at the end of the 2020 season, as he was arbitration-eligible that winter but expected to miss the entire 2021 season while rehabbing from that ligament replacement procedure.

The Dodgers subsequently inked Kahnle to a low-cost, two-year contract with an eye toward paying him to rehab in 2021 and enjoying a hopeful rebound campaign at a slightly higher rate in 2022. It didn’t work out quite as well as hoped, given that Kahnle was only able to return to the mound for 13 2/3 regular-season innings in 2022 — plus a pair of postseason frames in which he served up three runs.

Kahnle’s regular-season showing was plenty promising, however. He pitched to a sharp 2.84 ERA and fanned a gaudy 30.4% of his opponents against a strong 6.5% walk rate. Kahnle’s 95.6 mph average fastball was nowhere near its 98 mph peak, but the right-hander compensated by absolutely overloading on changeups; Kahnle threw his four-seamer at just a 23% clip against a mammoth 76.4% usage rate for his changeup.

The new-look pitch selection paid dividends in that small sample, resulting in a career-high 68% ground-ball rate and a massive 17.2% swinging-strike rate. Kahnle doesn’t boast the power sinker that the Yankees regularly tend to prefer — particularly among their relievers — but that enormous ground-ball rate certainly aligns with the Yankees’ recent penchant for loading up on relievers with considerable ground-ball rates.

At his best, Kahnle has been a high-quality setup option with a blazing fastball and swing-and-miss changeup that’s helped him neutralize lefties every bit as well as he’s handled righties. While that Tommy John surgery, a shoulder injury and a lengthy bout with forearm inflammation in 2022 have limited Kahnle’s time on the mound, he carries a solid 3.44 ERA over his past 188 1/3 big league innings, during which time he’s fanned nearly a third of his opponents.

Kahnle adds a big arm and another lofty ground-ball rate to a Yankees bullpen currently led by Clay Holmes, Jonathan Loaisiga, Wandy Peralta and Lou Trivino. New York has seen a significant portion of its bullpen — Aroldis Chapman, Zack Britton, Chad Green, Miguel Castro — reach free agency this winter, and they’re currently dealing with injuries to two of their top relievers. Deadline pickup Scott Effross is likely out for all of the 2023 season after undergoing Tommy John surgery in October, while righty Michael King is on the mend from an elbow fracture (though he could potentially be ready early next season).

Adding Kahnle’s two-year deal to the books bumps the Yankees to a projected $211MM payroll for the 2023 season and moves their luxury-tax payroll to a bit more than $227MM, per Roster Resource. That leaves the Yankees, who are still pursuing a reunion with Aaron Judge and expected to meet with Brandon Nimmo during this week’s Winter Meetings, less than $6MM from the first tier of luxury penalization. The Yankees went well over the tax line in 2022 and appear poised to do so again in 2023, with or without Judge.