Jeff Francis seemed headed for stardom when, at the age of 26, he won 17 games and pitched in the World Series. This offseason, in his first appearance on the free agent market, he signed with the Royals for $2MM plus incentives. It's a modest guarantee for a pitcher who still has promise entering 2011. 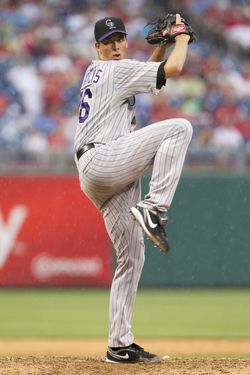 Teams aren't going to commit aggressively to pitchers who post 5.00 ERAs, especially if they aren't far removed from serious shoulder issues. Francis' ERA sat precisely at 5.00 after 104 1/3 innings of work last year, in his return to the majors after missing the 2009 campaign with shoulder surgery. The former 9th overall pick wasn't in position to command much as a free agent, even after a successful return to the major leagues.

But things could be different next offseason. Francis, who just turned 30 in January, is still relatively young. And if he puts together a full season, he'll have an easier time convincing teams that his shoulder is no longer a concern.

Though Francis' 2010 ERA and 4-6 record don't look good, his peripheral stats do. He posted a robust 47% ground ball rate last year, striking out nearly three times as many hitters as he walked. What's more, his FIP and xFIP suggest he was more deserving of an ERA under 4.00. And while the American League has the DH, it doesn't have Coors Field, the only home park Francis has known as a big leaguer.

There are no guarantees for Francis or for his new team. If he encounters more shoulder problems or struggles to surpass last year's innings total, the market for him won't be strong after the season. But a healthy year and a little more luck could position Francis for the big free agent contract he didn't sign this past offseason.