Some links from the so-called junior circuit…

Despite interest from several teams, the Dodgers have not had any serious trade discussions about right-hander Hiroki Kuroda according to Jon Paul Morosi of FOX Sports. Morosi notes that tomorrow's start against the Angels will give teams a chance to evaluate Kuroda against an AL lineup.

Diamondbacks GM Kevin Towers is said to hold the 36-year-old righty in high regard, and team ownership recently said they'll be able to take on payroll at the deadline. Kuroda will require compensation to waive his no-trade clause, though it's unclear exactly what kind of compensation he's looking for. The Reds and Rockies scouted his most recent start, and Morosi reminds us that the Yankees are always lurking.

Free agenty left-hander Scott Kazmir worked out for the Rangers earlier this week, reports Anthony Andro of The Star-Telegram. Kazmir was healthy for the workout but the team hasn't made any decision yet.

"We've talked with him, doing our due diligence," said GM Jon Daniels. "Not sure if anything's going to come of it, but we try to look at every opportunity to see if someone can help us."

The Rangers are focusing on bullpen help at the moment, and they currently have three lefties in their bullpen: Arthur Rhodes, Darren Oliver, and Michael Kirkman.

The Rockies shored up their second base situation earlier today by acquiring Mark Ellis from the Athletics, and GM Dan O'Dowd told Troy E. Renck of The Denver Post that he still has a "little" financial room to make another move (Twitter link).

Colorado has reportedly been calling other teams to gauge the pitching market, and they're one of several clubs showing interest in Hiroki Kuroda. The Rockies took on $1MM of the $3MM left on Ellis' contract and they started the year with a payroll just over $82MM. If they are willing to match last year's payroll ($84MM or so), they would still have another million bucks to play around with.

Kerry Wood turned down more substantial offers to return to the Cubs last offseason and, ironically enough, his affordable $1.5MM salary has rival teams wondering if they can lure Wood away. Trade interest in the reliever is picking up just as Wood and his wife, Sarah, are starting a family foundation in Chicago. So Wood told Bruce Miles of the Daily Herald that he would have to be presented with a ‘great’ deal for both himself and the Cubs to waive his no-trade clause and leave Chicago.

Wood says he and his wife have discussed the possibility of a trade and determined that they won’t accept any proposals that are less than ideal. Wood, who will be activated from the disabled list tomorrow, has a 2.25 ERA with 7.9 K/9 and 3.8 BB/9 in 24 innings for the 33-48 Cubs.

The Indians announced that they released Adam Everett after the infielder cleared waivers. Cleveland designated Everett for assignment earlier in the week to create roster space for callup Lonnie Chisenhall.

Everett, 34, played second, short and third for the Indians this year. Though he has never been known for his bat, his .217/.277/.233 line through 67 plate appearances was not enough for him to keep his roster spot, especially with promising infield talent on Cleveland's Triple-A club.

No second baseman has suited up for the A's as often as Mark Ellis, but when the 34-year-old lost his starting job earlier this month, it became clear that his time in Oakland would likely end soon. Ellis' nine-year tenure with the Athletics is now officially over. The A's announced that they sent Ellis and cash considerations to the Rockies for right-hander reliever Bruce Billings and a player to be named later. 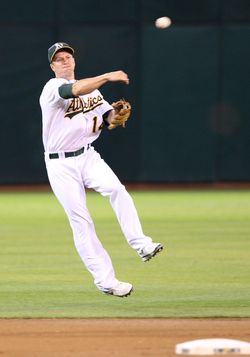 The A's exercised Ellis' $6MM option last offseason and the infielder will be eligible for free agency this fall. He still has $3MM remaining on his 2011 contract and the Rockies will cover $1MM of that, according to Troy Renck of the Denver Post (Twitter link). Though Ellis currently projects as a Type A free agent, draft pick compensation was probably not a major factor in the deal, as there's no guarantee he'll receive an offer of arbitration.

The Rockies have used six second basemen this year: Jonathan Herrera, Chris Nelson, Jose Lopez, Eric Young, Alfredo Amezaga and Jose Morales. The group has combined for a .610 OPS, 23rd among MLB second basemen. Herrera, the Rockies' primary second base option, has struggled to hit nearly as much as Ellis; the 26-year-old has a .237/.311/.303 line.

Billings, 25, pitched in his first (and so far only) MLB game on May 27th, when he allowed one earned run on five hits in two innings against the Cardinals. The former 30th round pick has a 4.47 ERA with 8.4 K/9 and 3.8 BB/9 in his first season at Triple-A and his first full season as a reliever.

The Tigers aren’t pursuing Jose Reyes, but they are looking at the market for starting pitching, according to Jon Paul Morosi of FOX Sports. Though Tigers officials appear content with their offense, their rotation is becoming a concern.

The Tigers announced this morning that they’re replacing converted reliever Phil Coke in the rotation with rookie Charlie Furbush. The Tigers will intensify their search for starting pitching if Furbush or another young pitcher like Andrew Oliver or Jacob Turner doesn’t prove himself to be a reliable starter in the next month or so.

This afternoon's starter, Justin Verlander, has pitched himself into the Cy Young conversation. However, the rest of the Tigers' rotation – Coke, Max Scherzer, Brad Penny and Rick Porcello – hasn't been as effective.

The Tigers could get an offensive boost from Carlos Guillen, who is on a rehab assignment. One of the infielder’s representatives told Morosi that he plans to return after the All-Star break. In the meantime, Detroit’s offense is scoring; they’re fourth in the American League in runs.