The Tigers can tie the White Sox for the AL Central lead today, but it'll take a win over the Royals and some help from the Indians, who are visiting the south side of Chicago. Here are today's links… 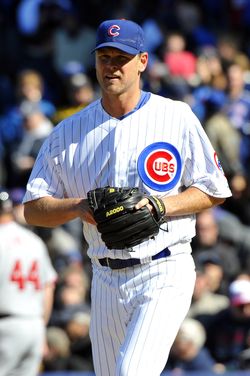 Some links as Saturday turns into Sunday…

The Cubs and veteran reliever Kerry Wood have agreed to a one-year contract that also includes an option for 2013.  The contract will pay Wood $3MM next season, according to Gordon Wittenmyer of the Chicago Sun-Times (via Twitter) with the 2013 option also worth $3MM.  The new deal was announced with a bit of theatricality at the Cubs fan convention, as Wood then stepped onto the stage to a raucous ovation from fans.

Wood's return to Chicago was considered a foregone conclusion but negotiations hit a snag earlier this week, which drew the Phillies and Reds into the Wood market.  Things appeared to clear up by Wednesday, however, when FOX Sports' Jon Paul Morosi reported the two sides were close on a one-year deal with an option for 2013.

The Cubs are close to a one-year deal with reliever Kerry Wood, tweets Jon Paul Morosi of FOX Sports.  The contract will include a club option for 2013.  Earlier today, Cubs president Theo Epstein told reporters, "If we can't figure this out, something's wrong."

Wood, 34, was drafted fourth overall in 1995 by the Cubs and stayed in the organization through the 2008 season.  Injuries pushed the hard-throwing Texan to a relief role, and he spent the 2009-10 seasons with the Indians and Yankees.  Wood returned to the Cubs for the 2011 season on a below-market deal with a $1.5MM base salary.  It was suggested he sought a salary closer to market value this time around, and yesterday Cubs GM Jed Hoyer said the team offered Wood a substantial raise.

Reds GM Walt Jocketty says he’s hopeful to have resolved things with Francisco Cordero "one way or another" this week and that the free agent closer is up against a "soft deadline," according to John Fay of the Cincinnati Enquirer. If Cordero doesn’t re-sign with Cincinnati, the Reds could turn to Kerry Wood, depending on his asking price. The club would probably not sign both Cordero and Wood, according to Jocketty.

The Reds have maintained interest in re-signing Cordero throughout the offseason. The 36-year-old posted a 2.45 ERA with 5.4 K/9, 2.8 BB/9 and a 50% ground ball rate in 69 2/3 innings for Cincinnati this past season and has drawn interest from other clubs, including the Angels.

9:34am: Kerry Wood's "days as a Cub appear all but over," writes Dave Kaplan of CSNChicago.com after talking to a source with knowledge of the reliever's negotiations with the team.  Kaplan quotes his source:

"Woody wanted to be here despite the rebuilding process but while the Cubs were saying they wanted him back they were unwilling to pay him the market value for a solid set up man.  He has heard from a number of teams that are World Series contenders and they are all willing to pay him a very fair salary to strengthen their bullpen. The Cubs expected him to pitch for another hometown discount. He has already done that for them a couple of times before. There is no reason that he should have to do that again."

Wood told Kaplan last night on WGN Sports Radio that his family plans on staying in the Chicago area for a long time whether or not he finishes his career with the Cubs.  Last week Cubs president Theo Epstein said he was "actively involved in negotations" to bring Wood back, noting, "I think this one should work out."  If Epstein and Wood fail to find common ground, Kaplan says the Tigers, Phillies, Reds, Angels, and others are interested.

11:04pm: The Cubs and Wood can't agree on the money or the length of a contract, writes Bruce Levine of ESPNChicago.  Wood seeks around $4MM, writes Jim Salisbury of CSNPhilly.com.  The big righty told NBC-5 Chicago he'll make a decision by Friday, which also marks the start of the Cubs Convention.

6:08pm: The Cubs and Phillies have expressed the strongest interest in signing Wood, according to Jon Paul Morosi of FOXSports.com.

1:50pm: Late last week Kerry Wood appeared to be working toward a one-year deal to return to the Cubs, but we soon heard that it was far from done and that Wood is still in talks with several teams about a 2012 contract. The Phillies could be one of those teams based on these two tweets from ESPN's Jerry Crasnick, who reports that Philadelphia has Wood on their radar but their interest could be contingent on the health of Jose Contreras.

The 40-year-old Contreras had season-ending elbow surgery in August after appearing in just 17 games (14 innings of work) for the Phils last season. He compiled a 3.86 ERA and 8.4 K/9 but struggled with his control, walking eight and hitting a batter in those 14 innings. Wood, on the other hand, whiffed 10.1 per nine over 51 innings of 3.35 ERA ball with the Cubs, with a more reasonable 3.7 BB/9.

The Phillies lost Ryan Madson and Brad Lidge both to free agency this winter. They pounced early to replace Madson by signing Jonathan Papelbon. Wood would represent an affordable option to set-up for Papelbon. As Crasnick notes in a final tweet, the allure of playing for a contender may have more appeal than the Cubs' rebuilding philosophy under the new front office headed by Theo Epstein and Jed Hoyer.