Ellis spent his first nine seasons in the bigs with the Athletics, providing a steady presence at the keystone. He was at his most productive in Oakland, slashing .265/.331/.397 and leaning on excellent defense to put up approximately 25 wins above replacement (depending upon one’s favored WAR measure) in that stretch.

After a mid-season trade to the Rockies in 2011, Ellis inked a two-year pact to join the Dodgers and then a one-year pact last year with the Cardinals. Though productive with Los Angeles (in spite of a sub-.700 OPS), Ellis stumbled last year in St. Louis, slashing just .180/.253/.213 in his 202 plate appearances.

With that dozen years of action in the books, Ellis says he is ready to spend more time with his family and enter a new career path. The highly-respected big leaguer should have no problem getting back in the game in another capacity if he so chooses, and A’s GM Billy Beane already indicated that he hopes Ellis will do so for his longtime home club.

Left-hander Joe Saunders has switched agents and is now being represented by The Legacy Agency, ESPN’s Jerry Crasnick reports (Twitter link).  Saunders had previously been a Legacy client prior to the 2014 season, when he made the change to Craig Landis of LSW Baseball.  Be sure to check out the MLB Trade Rumors Agency Database for agency info on over 1,700 players.  Agents: if you’ve got a 40-man roster player or top prospect whose representation is not correctly noted, we welcome corrections at mlbtrdatabase@gmail.com.

Though there’s been speculation that Royals GM Dayton Moore could be a possibility to take over the GM slot in Atlanta following Frank Wren’s dismissal, Royals owner David Glass told Jon Heyman of CBS Sports that Moore is “absolutely” staying with the Royals. Moore’s contract runs through 2016, but as Heyman and others have noted, it’d seem odd to leave town after getting the Royals to their first World Series in 29 years. Glass had nothing but praise for Moore: “He’s done a great job. He’s as good as it gets as far as a general manager.”

The Padres have already taken a hit to their starting pitching depth after losing Cory Luebke to a second Tommy John surgery, and now right-hander Joe Wieland could suffer the same fate. Wieland is scheduled to have an MRI on his sore right elbow today, and Yahoo's Jeff Passan tweeted late last night that there's "significant concern" throughout the organization, with a re-torn UCL being the worst-case scenario. Wieland, like Luebke, spent the 2013 season recovering from 2012 Tommy John surgery. A second Tommy John surgery has become a familiar refrain around MLB of late; Daniel Hudson underwent his second Tommy John last summer, and there's a strong likelihood that Braves hurlers Kris Medlen and Brandon Beachy will do so as well. D'Backs lefty Patrick Corbin could be headed for his first Tommy John surgery as well.

Here are a couple of other NL-West-related items…

Mike Hegan, a longtime former player and broadcaster, passed away on Wednesday at age 71.  Hegan posted a .712 OPS in 2452 PA over 12 seasons with the Yankees, Brewers and Athletics from 1964-77, picking up a spot on the 1969 AL All-Star team as a Seattle Pilot (before the franchise moved to Milwaukee) and earning a World Series ring with the A's in 1972.  After retirement, Hegan moved to the broadcast booth and spent 12 seasons as a Brewers TV broadcaster before moving to his hometown of Cleveland in 1989 and spending 23 seasons calling Indians games on both TV and radio.  The MLBTR staff sends our condolences to Hegan's family and friends. 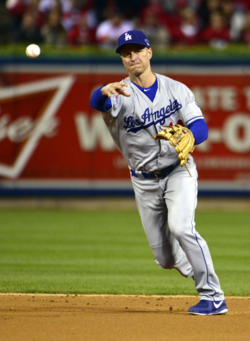 Former first-round pick Brian Anderson has come full circle, deciding to try his hand as an outfielder again. Anderson tallied 355 big league games from 2005-09, mostly for the White Sox, before switching to the mound in 2010. He battled injuries as a pitcher, and tells MLBTR now, "I'd love to get back on the field again." Here are more notes from the Central divisions.

Tim Dierkes and Zach Links contributed to this post.

The Royals, Rays and Dodgers are all interested in second baseman Mark Ellis, reports Ken Rosenthal of FOX Sports (on Twitter). Rosenthal goes on to opine that at the moment, Ellis isn't a great fit for the Rays — a point with which I agree. Ben Zobrist figures to play second base regularly in 2014 given the outfield of Wil Myers, Desmond Jennings, David DeJesus and Matt Joyce as well as the presence of Yunel Escobar at shortstop.

The Dodgers turned down a $5.75MM club option on Ellis earlier in the offseason, but he could make sense for them as an insurance policy in the event that Cuban signee Alexander Guerrero isn't ready to take the reins as the team's everyday second baseman right out of Spring Training. The 36-year-old Ellis slashed .270/.323/.351 for the Dodgers in 2013 and played strong defense at second base, as he's done throughout his career.

Ellis' slash line isn't particularly strong (it translated to a wRC+ and an OPS+ of 92), but even repeating those somewhat pedestrian numbers would be a marked improvement for the Royals. Kansas City's second basemen combined to bat just .240/.296/.306 as a collective unit in 2013. Emilio Bonifacio projects as their current starter, and while he was solid for Kansas City after coming over from Toronto, he's been an inconsistent performer throughout his career.

The Royals are very interested in Carlos Beltran, but the Yankees remain the favorites to sign him, Joel Sherman of the New York Post reports. "I think at this point it would be an upset if he didn’t end up there," one executive tells Sherman. The Yankees have thus far been unwilling to give Beltran a three-year deal, but they could eventually land him by giving him three years or by paying heavily for two. Regardless of the Yankees' current issues, the perception of the Yanks as a winning organization matters to Beltran, even though they won fewer games than Kansas City did last year. Here are more notes from around the Majors.

The Marlins are looking to fill voids at second base, third base, and catcher this offseason and it appears that GM Dan Jennings has a level of flexibility that predecessor Larry Beinfest did not, writes Peter Gammons of Gammons Daily.  For their second base opening, Miami has discussed Mark Ellis, who would also provide the club with some needed veteran leadership.

The 36-year-old had his $5.75MM club option declined by the Dodgers after they finalized their deal with Cuban second baseman Alexander Guerrero.  Ellis batted .270/.323/.351 with six homers and four steals in 126 games (480 plate appearances) for the Dodgers and, as usual, he was a standout defender at second base.  Ellis posted marks of +7.6 in UZR/150 and +12 in The Fielding Bible's Defensive Runs Saved (DRS) metric.  The Tigers also have Ellis on their radar.

The Marlins have also approached the Red Sox about 22-year-old third baseman Garin Cecchini, even though he would appear to be similar to Colin Moran, the No. 6 overall pick in the 2013 draft.  Cecchini spent time in Advanced-A and Double-A in 2013, hitting a combined .322/.443/.471 with seven homers.  Baseball America ranked Cecchini as the seventh-best prospect in the Red Sox's system heading into the 2013 season.  One executive covering the Arizona Fall League told Gammons that the youngster “has sneaky power that will play in the big leagues and will keep increasing in pro ball.”