The Rangers' 2012 pitching staff just took shape and so did the rest of their offseason. The defending American League champions agreed with Joe Nathan on a two-year deal that includes a team option for 2014. Dave Pepe of Pro Agents, Inc. negotiated a $14.75MM guarantee for the four-time All-Star. Nathan will earn $7MM in 2012 and 2013 and the club holds a $9MM option for 2014 ($750K buyout).  Nathan can earn up to $1MM in incentives based on games finished, reports Jon Paul Morosi of FOX Sports, and the 2014 option can vest based on games finished in '13. 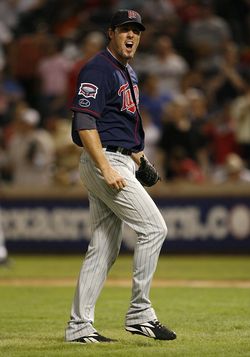 The Rangers announced that Neftali Feliz is finally headed to Texas' rotation. After successfully converting C.J. Wilson and Alexi Ogando into starters, the Rangers will attempt to bolster their rotation with a converted reliever for a third consecutive spring. However, the Rangers aren't out on starters, tweets Ken Rosenthal of FOX Sports. There's less pressure for the Rangers to over-spend on Wilson or another free agent arm now that they have an established arm at the back of their bullpen and five starters in Feliz, Ogando, Colby Lewis, Derek Holland and Matt Harrison.

Nathan, an unranked free agent, won't cost the Rangers a draft pick and his former team, the Twins, won't obtain a compensatory pick. The Twins declined a $12.5MM option for Nathan after the regular season, but maintained interest in their longtime closer.

MLBTR's Tim Dierkes ranked Nathan 48th on his list of top 50 free agents. Bryan Grosnick breaks the move down from a fantasy baseball perspective at CloserNews.com.