The Indians have extended starting pitchers C.C. Sabathia, Jake Westbrook, Cliff Lee, and Fausto Carmona in the last decade, in most cases getting cost savings and extra free agent years in the process.  Fresh off a breakout season, could 26-year-old Indians righty Justin Masterson be next? 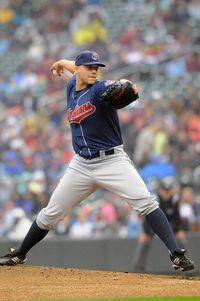 Masterson's 2011 season featured career-bests in innings (216), ERA (3.21), walk rate (2.7 per nine), home run rate (0.46 per nine) and wins (12).  His always-strong groundball rate held up, and his 6.6 K/9 was acceptable.  The knock on Masterson has always been his difficulty retiring left-handed batters.  Though he wasn't able to put them away with strikeouts, Masterson limited his walks against left-handed batters and posted a 3.88 xFIP against them.  In general, he might not be able to maintain 2011's 6.3% home run per flyball rate, but Masterson still remains capable of a sub-4.00 ERA.

Masterson has three years and 108 days of Major League service, so he's arbitration eligible for the first time this winter.  Matt Swartz's projections call for a $3.6MM salary in 2012.  Masterson's arbitration case may be tied to the fates of other first-time starters such as Jeff Niemann, Max Scherzer, and Matt Harrison this year, among others.

In recent times, extensions for pitchers with three to four years of service have been rare.  Perhaps once a player is on the cusp of his first big payday through arbitration, he prefers to see that through for at least one year.  If an extension is preferable to Masterson, his agent Randy Rowley could look to Johnny Cueto's contract, signed a year ago with the Reds.  At an even three years, Cueto had less service time than Masterson, one reason Masterson bests Cueto by 82 2/3 innings.  Cueto still managed four more wins, but they're otherwise comparable, with the career and platform year ERA edge going to Masterson.  The numbers converge further if we only look at Masterson's 87 career starts.

Cueto signed a four-year, $27MM deal.  He received $16.2MM for his three arbitration years and $10MM for his first free agent year, with a club option at the same price for another.  The same contract would be a reasonable target for Masterson, perhaps with a few hundred thousand tacked on so he could top Cueto.