The Nationals brought in several new players this offseason, but they may have just made their most important move. Washington has agreed to terms on a new $100MM six-year contract extension with Ryan Zimmerman, with a club option for a seventh year worth $24MM. In conjunction with his current deal, the new agreement can keep the 27-year-old in the nation's capital through 2020 if the option is exercised. Saturday was the Brodie Van Wagenen client's self-imposed deadline for a new deal. 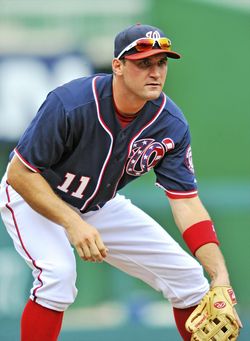 Zimmerman, 27, was already under contract through 2013 thanks to the five-year, $40MM contract he signed in April 2009. He is slated to earn $12MM this season and $14MM next season, and would have become a free agent this winter had he not signed that first extension. No-trade protection was said to be the final hurdle in talks and the new deal will provide Zimmerman with a full no-trade clause.

Since making his big league debut a few weeks after being the fourth overall pick in 2005, Zimmerman is a .288/.355/.479 career hitter with four 20+ homer and four 30+ double seasons to his credit. Over the last three years, he's produced a .296/.370/.499 batting line with a Gold Glove, an All-Star Game berth, two Silver Sluggers, and a pair of top-25 finishes in the MVP voting. Only Evan Longoria and Adrian Beltre have posted a better UZR at the hot corner than Zimmerman (+24.6 UZR) since 2009. In terms of wins over replacement, he's been the 12th most valuable position player in baseball over the last three seasons (17.1 WAR).

As with every long-term contract, the Nationals are assuming a significant amount of risk. Zimmerman missed more than two months due to abdominal surgery last summer, and he missed close to two months with a shoulder problem in 2008. After playing in 150+ games in his first two full seasons, he's topped the 150-game plateau just once in the last four years. Although he's an excellent defender at the hot corner at the moment, Zimmerman may have to move to first towards the end of the deal, a move that will be easier to swallow if third base prospect and 2011 sixth overall pick Anthony Rendon develops as expected.

As our Extension Tracker shows, Zimmerman's contract is the fifth $100MM+ extension handed out over the last calendar year, and the third multi-year extension given out by the Nationals this offseason. Mike Morse (two years, $10.5MM) and Gonzalez (five years, $42MM) also signed for multiple years this winter while Zimmermann and Clippard remain extension candidates as well. Washington is very clearly a team on the rise, and now they know their franchise player will be around when the rebuild results in a playoff spot.