"Toto, I have a feeling we're not in Baltimore anymore," tweeted righty Jeremy Guthrie this morning after learning he'd been traded from the Orioles to the Rockies.  The clubs reached an agreement that sends Guthrie to Colorado for pitchers Jason Hammel and Matt Lindstrom, tweets Ken Rosenthal of FOX Sports.  Dan Connolly of the Baltimore Sun first reported the near-deal, which has now been officially announced.

Guthrie's arbitration hearing against the Orioles was scheduled for this morning with a $7.25MM-$10.25MM spread, but his agent Brodie Van Wagenen of CAA Sports tweeted today he reached an agreement on a one-year deal that fits "within the Rockies' payroll structure" and is "a showing of good faith."  Connolly says Guthrie settled with the Rockies at $8.2MM, which is $550K below the midpoint.  With the Orioles, a hearing had "seemed possible and even likely," tweeted Van Wagenen. 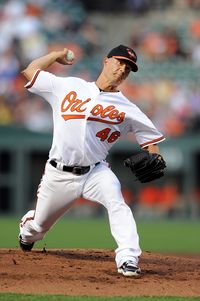 Guthrie, 32, had been a regular in Baltimore's rotation since being claimed off waivers from the Indians five years ago.  Last year he posted a 4.33 ERA, 5.6 K/9, 2.9 BB/9, 1.13 HR/9, and 39.6% groundball rate in 208 innings for the Orioles.  His skills suggest a 200-inning, 4.50 ERA guy in the AL East.  Guthrie (pictured) will be a useful addition for a Rockies rotation long on options but short on stability, assuming his proclivity to surrender home runs doesn't worsen in Coors Field.  Guthrie will be eligible for free agency after the season, and I would not expect draft pick compensation.

With the trade, Orioles vice president of baseball operations Dan Duquette has subtracted his rotation's one sure thing in favor of Hammel, who was demoted from the Rockies' rotation last summer.  He did acquire two pitchers for the price of one, as well as potential 2013 control for each.  Noted Duquette on today's conference call, "We didn't have any offers of young prospects for Jeremy."  Duquette has hooked up with Rockies GM Dan O'Dowd for trades twice before, when the former was at the helm of the Red Sox.