12:05pm: The Blue Jays have agreed to sign Maicer Izturis to a three-year, $10MM contract according to Jon Heyman of CBSSports.com (Twitter links). The deal includes a club option for a fourth year. Izturis is represented by Peter E. Greenberg & Associates. 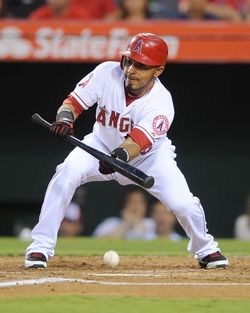 As Shi Davidi of Sportsnet.ca points out (on Twitter), this is the largest contract GM Alex Anthopoulos has given to a free agent. The one-year deals worth $4.5MM given to Darren Oliver and Francisco Cordero last offseason were the previous record holders. Our Transaction Tracker has the breakdown of Anthopoulos' free agent signings.

Izturis, 32, hit .256/.320/.315 in 319 plate appearances for the Angels this year, his worst full season as a big leaguer. He won't hit for any power, but Izturis makes a lot of contact from both sides of the plate and is a capable defender at all three non-first base infield positions. He's also a threat to steal double digit bases. Izturis has hit .264/.327/.360 in 1,051 plate appearances across the last three years overall.

The Blue Jays figured to target infield depth this winter since Kelly Johnson is a free agent and Yunel Escobar is a trade candidate. They briefly had Mike Aviles after acquiring him from the Red Sox for manager John Farrell, but he's since been flipped to the Indians. Izturis did not rank among Tim Dierkes' Top 50 Free Agents.