The Cubs have agreed to terms with Scott Baker on a one-year contract, the team announced. The deal includes a $5.5MM base salary with $1.5MM in incentives, reports Paul Sullivan of The Chicago Tribune and MLBTR's Ben Nicholson-Smith (Twitter links). The right-hander is represented by Octagon, as our Agency Database shows. 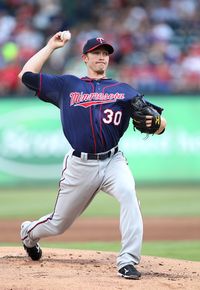 Baker, 31, did not pitch at all in 2012 due to Tommy John surgery, prompting the Twins to decline his $9.25MM option after the season. The two sides had been discussing a new contract before the right-hander hooked on with the Cubbies. Chicago is reportedly looking to add pitching on short-term deals this winter, and this contract accomplishes that.

Baker has spent his entire career with Minnesota, pitching to a 4.15 ERA with 7.2 K/9 and 2.1 BB/9 in nearly 1,000 career innings. He posted a career-low 3.14 ERA with a career-high 8.3 K/9 in 134 2/3 innings last season while missing time with elbow problems. Although he has cracked the 200-inning plateau just once in his career, Baker has thrown at least 170 innings three times in the last five years.

Tim Dierkes ranked Baker 46th on his Top 50 Free Agents List, predicting he would re-sign with the Twins. Check out our Free Agent Prediction Contest Leaderboard to see where you rank among MLBTR's readers.