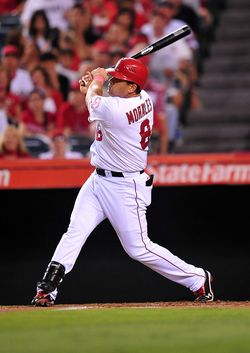 Angels GM Jerry Dipoto had been hoping to obtain an innings eater for Morales, and that's precisely what he's getting in Vargas. The 29-year-old has completed at least 192 innings in each of the past three seasons. He pitched 217 1/3 innings this past season, posting a 3.85 ERA with 5.8 K/9, 2.3 BB/9 and a 40.2% ground ball rate. He joins a rotation that will include Jered Weaver, C.J. Wilson, Joe Blanton and Tommy Hanson. Garrett Richards now projects as the team's sixth starter.

Vargas will go to arbitration for the third and final time this offseason and remains on track to hit free agency one year from now. MLBTR projects a 2013 salary of $7.4MM for Vargas, a CAA Sports client.

Vargas, a fly ball pitcher like Weaver, will have a fleet-footed outfield of Mike Trout, Peter Bourjos and Josh Hamilton covering lots of ground behind him. Mark Trumbo now projects as the Angels' designated hitter. Though Bourjos and Trumbo also surfaced in trade rumors after the Angels signed Hamilton, it now seems likely that they'll stay put.

Morales, who is also one year away from free agency, projects to earn $4.8MM in 2013. He'll add some offense to a Mariners lineup that finished last in the American League in runs scored in 2012. The 29-year-old posted a .273/.320/.467 batting line with 22 home runs and 26 doubles in 522 plate appearances for the Angels this past season after missing the entire 2011 campaign with a leg injury.

The addition of Morales could cost Justin Smoak playing time, assuming the Mariners find a way to get Jesus Montero into the starting lineup most days. The Mariners' rotation will include Felix Hernandez, Hisashi Iwakuma, Blake Beavan and, potentially, promising young arms such as Erasmo Ramirez, James Paxton and Danny Hultzen. It's possible GM Jack Zduriencik will add a veteran arm, MLB.com's Greg Johns suggests (on Twitter).