The Rockies have re-signed lefty Jeff Francis, the team announced (on Twitter). It's a one-year contract worth $1.5MM guaranteed with another $1.5M in incentives based on innings pitched. Francis is represented by Frontline. 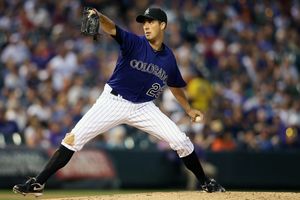 Francis, 31, was drafted in the first round by the Rockies in 2002 and remained with the club through 2010. After a year and a half detour with the Royals and Reds, he rejoined the organization last June and pitched 113 innings in the Majors. Francis had decent peripheral stats but, as usual, allowed a ton of hits. Among starters with at least 100 innings in 2012, Francis' 85.3 mile per hour average fastball velocity ranked fifth-lowest. He ranks second in Rockies franchise history with 61 wins, behind Aaron Cook.

Francis probably has a claim on a rotation spot to begin the year with the 2013 Rockies, who have Jorge De La Rosa and Jhoulys Chacin penciled in. The team augmented their bullpen a few weeks ago, acquiring reliever Wilton Lopez from Houston.

The Denver Post has the breakdown of the incentives. ESPN's Jerry Crasnick originally reported the agreement (Twitter links). Photo courtesy of U.S. Presswire. Mike Axisa contributed to this post.