Zack Greinke made quite a few headlines this offseason by becoming the highest-paid right-handed pitcher in Major League history (Felix Hernandez has since topped him). The former No. 6 overall selection in the draft signed a six-year, $147MM with the Dodgers.

Greinke has long been a high-profile arm, thanks largely to his 2009 American League Cy Young Award. His 9.3 wins above replacement (Fangraphs version) that season were the most by any pitcher since Randy Johnson's 2004 season.

So it's no wonder that Greinke had a long list of suitors when it became evident that the Royals were going to trade him. Nor is it surprising that Greinke commanded a young shortstop, a young center fielder and a pair of right-handers that had both been first-round picks.

On December 19, 2010, the Royals traded Greinke and Yuniesky Betancourt to the Brewers in exchange for shortstop Alcides Escobar (24 years old at the time), center fielder Lorenzo Cain (24), right-hander Jake Odorizzi (20) and right-hander Jeremy Jeffress (23). Each player in the deal had recently ranked in Milwaukee's Top 10 prospects, according to Baseball America. Let's take a look at each on an individual basis… 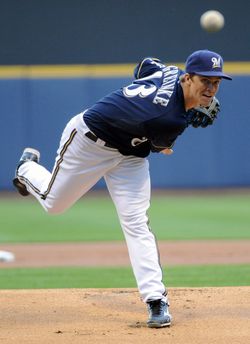 In the end, the Brewers got an ace-caliber pitcher and an NLCS berth in exchange for the four prospects they dealt. Greinke managed to net them a trio of prospects including a new, promising shortstop to replace Escobar. Kansas City turned Greinke into an everyday shortstop, a promising center fielder and a pitching prospect that helped them acquire a new ace-caliber pitcher (Shields). However, the Royals are better positioned to compete with this top-of-the-rotation arm than they were the last time they had one.

Both teams fell a bit short of their best case scenarios (Milwaukee didn't win a World Series, and Kansas City cut ties with Jeffress for next to nothing), but this is a trade that definitely reaped benefits for each side.