This year’s draft will be the first to feature competitive balance draft picks. These picks, which go to small-market and low-revenue teams, were awarded in a lottery last year. Some will take place after the first round, others after the second round. Unlike with regular draft picks, it’s possible for teams to trade competitive balance picks, which means that each team surely has decided how much these picks are worth. 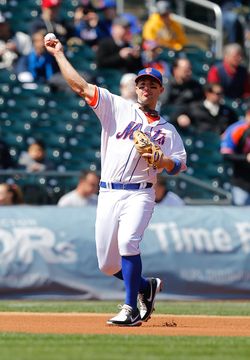 This is the full draft order. The competitive balance picks are as follows:

A 2009 study by Baseball Analysts’ Sky Andrecheck suggested that the average value of the No. 30 overall pick was 3.6 WAR — basically, the equivalent of about two decent seasons for a role player. The value of the competititve balance picks from No. 34 to No. 39, then, would be slightly less. Placing a numerical value on these draft picks in the current draft environment is tricky, however, because so much about the draft has changed in the past two years. Unlike in years past, teams are reined in by bonus pool allotments, so they aren’t picking players for the same reasons they used to.

Teams can trade competitive balance picks, and two trades have already occurred, both of them involving the Marlins. The Pirates traded (what turned out to be) their No. 35 pick to Miami, along with outfielder Gorkys Hernandez, for first baseman Gaby Sanchez and minor-league pitcher Kyle Kaminska. The Marlins also traded their own competitive balance pick to the Tigers in the Anibal Sanchez deal, receiving the Tigers’ pick in return.

The Gaby Sanchez deal is a lot simpler, so let’s work from there. Hernandez and Kaminska weren’t key parts of the trade, so the deal boils down to Gaby Sanchez for the No. 35 overall pick. Pirates GM Neal Huntington recently explained the rationale behind the deal in an interview with David Todd on 970 ESPN in Pittsburgh (beginning at around 12:30).

“You see a David Wright, and you recognize, man, there’s a comp pick and there’s the risk, is we may have given up David Wright,” Huntington says. (Obviously, Wright wasn’t a competitive balance pick, but he was the No. 38 overall pick in the draft in 2001.)

“You’ve also got a smaller chance to get an impact guy like David Wright, but you’ve got about a 60% miss rate at those picks, and in our minds, it’s going to be even [higher] now that the draft is much more scripted than it’s ever been.”

A look at recent draft history reveals Huntington’s analysis to be essentially correct. Let’s look at the 30-40 pick range from the 2001 through 2005 drafts. (Although Huntington mentioned the “30-to-40 pick range,” the No. 30 pick will typically be a traditional first-round pick, not a competitive-balance pick.)

This distribution of outcomes is fairly telling — in 55 picks, there’s one superstar (Wright), two very good players (Jones and Gonzalez), a good closer (Street), a decent regular (Saltalamacchia) and a smattering of role players. This was a better five-year period for picks 31 through 40 than the five-year periods before or after it, and still the chances of nabbing a meaningful player with one of those picks was, it appears, relatively small. For competitive balance picks after the second round, the chances of grabbing a good player are even smaller. (Well, at least theoretically. From 2001 through 2005, the list of quality players chosen between No. 66 and No. 75 includes Dan Haren, Kurt Suzuki, Jason Vargas, Wade Davis and Chase Headley. That’s not bad.)

Gaby Sanchez, who has produced 0.4 WAR for the Pirates this season, is more valuable than most players from the 31 through 40 range who made the majors, and obviously also more valuable than the ones who didn’t make the majors. He’s also cheap, making $1.75MM in his first year of arbitration eligibility. Notably, though, the Pirates quickly slotted him into the short end of a platoon role, meaning that they recognized him as a part-time player.

Is it worth it to give up a shot at the next David Wright for a part-time player? That depends on how great the shot is, and the position of the franchise making the trade. The Marlins were selling off their disappointing 2012 team at the time of the Sanchez deal, so it made sense for them to take a shot in the dark at finding the next David Wright. But the Pirates were trying to position themselves as a contender, so Sanchez had more value for them than a shot in the dark did.

Another consideration is the bonus pool allotment for competitive balance picks. Last year’s pool value for the No. 35 pick was $1.4MM; this year, that figure will be slightly higher. So the Marlins will have a little over $1.4MM extra to distribute to all its draft picks, assuming they sign whoever they take at No. 35, while the Pirates will forfeit the ability to spend that money. The Astros, for example, used a large bonus pool to their advantage in the later rounds last year, signing players like Lance McCullers Jr. for well over the bonus recommendation.

In the next few years, teams’ ability to trade competitive balance selections should allow us to begin to see how teams value draft picks. The competitive balance picks are late enough in the draft that they’re fairly low-percentage plays. They’re still valuable, however, so we should see rebuilding small-market and low-revenue teams try to acquire them — either one-for-one (or more or less one-for-one) for role players like Gaby Sanchez, or as part of packages in deals involving more premium talents.