The Athletics have acquired Alberto Callaspo from the Angels, according to Ken Rosenthal of FOX Sports (on Twitter). Danny Knobler of CBS Sports tweets that the A's will send Grant Green to the Angels in the deal, which has now been officially announced. 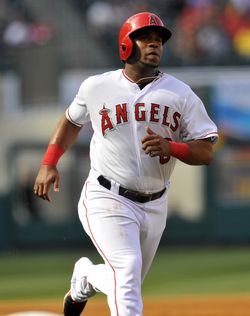 Callaspo, 30, was hitting .253/.323/.348 with five homers for the Angels so far this season, prior to tonight's game. Originally acquired from the Royals, he has extensive experience at second and third base, though he hasn't played second base since 2010. In spite of that fact, the A's plan to use him at second, according to MLB.com's Jane Lee (Twitter link). He is under contract for the 2014 season at $4.875MM — the second year of a two-year deal he signed with Anaheim this offseason.

Prior to the 2013 season, BA ranked Green eighth among A's prospects, noting that he may not be an impact bat but should provide enough offense from second base to be a solid regular. MLB.com's Jonathan Mayo ranked Green as the No. 3 prospect in Oakland's system, noting that he could be an offensive-minded second baseman who has plus athleticism.