The Red Sox have announced a three-team trade with the Tigers and White Sox that will send right-handers Jake Peavy and Brayan Villarreal to Boston and shortstop Jose Iglesias to Detroit. The White Sox will receive outfield prospect Avisail Garcia as well as minor league right handers J.B. Wendelken and Francellis Montas and shortstop Cleuluis Rondon. 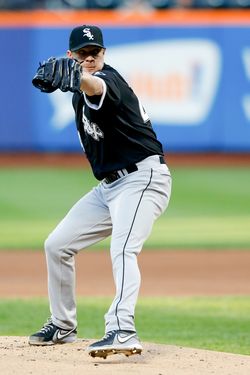 Peavy, 32, has a 4.28 ERA with 8.6 K/9, 1.9 BB/9 and a 35.2 percent ground-ball rate in 80 innings for the White Sox this season, though he's spent some time on the disabled list with a broken rib. Peavy hasn't had any pitch limitations since returning from the disabled list, however, as he fired 118 pitches in his final start with the White Sox. Advanced metrics like FIP (4.09) and xFIP (3.68) indicate that Peavy has been the recipient of some poor luck. He's more than a rental, as the Red Sox will control him for $14.5MM in 2014.

Iglesias, 23, is hitting .330/.377/.410 in 231 plate appearances for the Red Sox this season. While those numbers look terrific, Iglesias' bat has drawn been questioned, and he's been mired in a dreadful slump of late, hitting .212/.248/.222 with just one extra-base hit in his past 105 plate appearances. However, Baseball America ranked him ninth among Red Sox prospects prior to the season based largely on his glove, calling him perhaps "the best defensive shortstop prospect in the game." In a small sample of 452 1/3 Major League innings at shortstop, Iglesias has 22.2 UZR/150 and grades out as seven runs above average according to The Fielding Bible. He will provide the Tigers with an insurance policy in the event of a Biogenesis suspension for Jhonny Peralta and can take the reins as Detroit's full-time shortstop in 2014 should the club let Peralta depart via free agency.

Baseball America ranked the 22-year-old Garcia as the No. 74 prospect in baseball prior to the season, and he's delivered on that hype at Triple-A Toledo, hitting .382/.414/.549 with five home runs in 152 plate appearances. Garcia has the tools to be an everyday right fielder with average defense and All-Star upside, BA wrote in its preseason scouting report.

Montas, 20, has a 5.70 ERA with 10.1 K/9 and 3.4 BB/9 in 85 1/3 innings for Class-A Greensville this season. He ranked 22nd among Red Sox prospects prior to the season according to Baseball America. BA wrote that Montas "can light up a radar gun" better than anyone in Boston's system, as he regularly touches triple digits with his fastball. Montas flashes plus sliders at times but without consistency, BA adds. Ben Badler of Baseball America tweets that Montas has "freakish arm strength" and misses bats.

Wendelken, also 20, has worked out of the bullpen at Greenville this season. In 64 innings for Greenville, he has a 2.81 ERA with 7.6 K/0 and 2.8 BB/9. The Red Sox selected him in the 13th round of the 2012 draft, and BA noted that he was one of the country's most effective relievers, allowing just one run in 44 innings at Middle Georgia College and reaching 94 mph with his heater.

Baseball America's Ben Badler tweets that Rondon is a very smooth defender at short but offers little with the bat. The 19-year-old Rondon is hitting .277/.328/.353 for short-season Class-A Lowell this season.

Jon Heyman of CBS Sports was the first to report that the Red Sox and White Sox had a deal for Peavy (Twitter link). WEEI.com's Alex Speier first broke the news that it was a three-team trade involving the Tigers, and Danny Knobler of CBS Sports tweeted that Iglesias was going to the Tigers. Bob Nightengale of USA Today was the first to tweet that Garcia was headed to the White Sox. Speier also reported that Rondon would be included in the trade (on Twitter).