The Giants have re-signed right-hander Tim Lincecum to a two-year contract, which will keep the two-time NL Cy Young Award winner from reaching free agency.  The club officially announced the deal today after Lincecum passed a physical.  As shown in the MLBTR Agency Database, Lincecum is represented by the Beverly Hills Sports Council. 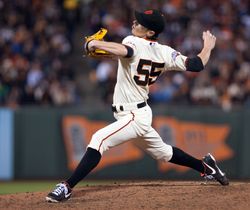 The Giants took care of their top offseason priority earlier this month when they agreed to a five-year, $90MM extension with outfielder Hunter Pence and priority No. 2 is now crossed off of the list as well.  San Francisco allegedly offered The Freak a two-year pact earlier this month and he turned it down, but it was presumably so that he could secure more money, not a longer deal.  If the Giants didn't get a deal done with Lincecum during the exclusive window, they almost certainly would have extended him a one-year, $14MM qualifying offer to guarantee either a return to SF or draft pick compensation.

Other free agent hurlers could be licking their lips after watching Lincecum take in an average annual value of $17.5MM.  This year's free agent class is headlined by the likes of Japanese sensation Masahiro Tanaka, Ervin Santana, Matt Garza, A.J. Burnett, Hiroki Kuroda, and Ubaldo Jimenez.

Had Lincecum hit the open market, he figured to garner a great deal of interest given the lack of quality starting pitching available.  Mariners GM Jack Zduriencik & Co. might be a little disappointed by this evening's news as they had scouts monitoring Lincecum's starts towards the final stretch of the season. The four-time All-Star is a native of Seattle.