Wednesday marks the four-year anniversary of the Angels bringing in one of the most accomplished starting pitchers of the previous decade. On May 20, 2016, they signed right-hander Tim Lincecum to a guaranteed contract worth a prorated $2.5MM. Considering Lincecum’s past achievements, it was worth a shot for the pitcher-needy Angels, but the experiment didn’t work out for either side. Lincecum didn’t even finish the season with the Angels, who only won 74 games that year and who designated him for assignment in the first week of August. 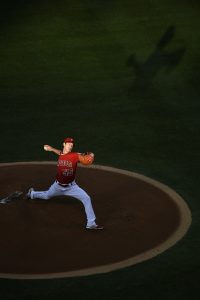 Of course, Lincecum brought a superb resume to the Angels. As a member of the Giants from 2007-15, “The Freak” made four All-Star teams, won three World Series championships and took home two National League Cy Young Awards. The San Francisco version of Lincecum also piled up 1,643 2/3 regular-season innings (269 appearances, 261 starts) and posted a 3.61 ERA with 9.33 K/9 and 3.54 BB/9. For the most part, Lincecum’s career started going off the rails in 2012, in which his 2.74 ERA from the prior season skyrocketed to 5.18, but there was still some magic left. Lincecum threw a 148-pitch no-hitter against the Padres in 2013, and he no-hit the Friars yet again the next season.

It was incredible that Lincecum recorded a no-hitter in back-to-back seasons, but shining moments have been few and far between since he underwent hip surgery in his last month as a Giant in September 2015. The Giants didn’t re-sign Lincecum after that, leading him to join the Angels several months later. That gamble couldn’t have gone much worse for the Angels, with whom Lincecum debuted June 18, 2016. It looked like a great move at first, as Lincecum threw six innings of one-run ball in a win over the Athletics in his Halos debut, but that proved to be his sole quality start with the team. Lincecum ultimately amassed 38 1/3 frames of 9.16 ERA pitching as an Angel. His last appearance came Aug. 5, when he yielded six earned runs over 3 1/3 innings in a loss to Seattle, before the Angels put an end to his run in their uniform.

Lincecum did get another shot, this time with the Rangers, on a guaranteed deal in 2018. That didn’t work out, though. The Rangers released Lincecum on June 5, 2018, when MLBTR’s Steve Adams wrote: “He’s been ramping up after missing much of the early portion of the season, but things haven’t gone especially well in Triple-A Round Rock. Lincecum has totaled 12 2/3 innings out of the bullpen, yielding eight earned runs on 14 hits and nine walks with 10 strikeouts in that time.”

There hasn’t been any Lincecum news on MLBTR’s pages since then, and even though he hasn’t officially retired, it’s hard to believe the soon-to-be 36-year-old will return to the majors. Lincecum was definitely a treat to watch during his peak from 2008-11, though. He totaled 200-plus innings in each of those seasons, combined for a matching 2.81 ERA/FIP with 9.97 K/9 and 3.21 BB/9, and cemented himself as a Giants icon. Unfortunately, odds are that his time in MLB is done.

The Rangers have granted right-hander Tim Lincecum his release, as MLB.com’s T.R. Sullivan was among those to tweet. Jon Heyman of FanRag Sports first broke the news that the team had decided not to promote Lincecum to the big leagues, leaving him with the choice of accepting a Triple-A assignment or granting him his release (Twitter link).

Texas signed Lincecum to a one-year, Major League deal that came with a $1MM guarantee back in March, but blister issues slowed his path back to a mound. He’s been ramping up after missing much of the early portion of the season, but things haven’t gone especially well in Triple-A Round Rock. Lincecum has totaled 12 2/3 innings out of the bullpen, yielding eight earned runs on 14 hits and nine walks with 10 strikeouts in that time.

Now, the 33-year-old former Cy Young winner will have to explore other options as he seeks to return to the Majors for the first time since a brief, ill-fated tenure with the Angels in 2016. Lincecum endured a precipitous decline during which he saw his fastball velocity plummet before ultimately requiring a major hip surgery that has prevented him from since reestablishing himself at the big league level. He’d been working exclusively as a reliever with the Rangers organization, and it seems likely that he’ll continue on that path if he ultimately latches on with a new organization.

Rangers GM Jon Daniels had nothing but praise for the amount of effort Lincecum put into his comeback attempt, telling reporters (Twitter link via Sullivan): “Despite good intentions and a lot of hard work, we didn’t feel it was the right move to bring Tim up here.”

In a candid interview with MLB.com’s Jon Morosi, Justin Verlander reveals that he thought his career was in jeopardy back in 2014 when he exited a start in Pittsburgh after one inning. His fastball clocked in the mid-80s that day, and as Verlander recalls, he “sat down and lost it” in the tunnel to the visitor’s clubhouse. His arm was in enough pain that an MRI would reveal he required shoulder surgery. Instead, however, Verlander eventually came to realize that failure to fully rehabilitate from offseason hernia/core muscle surgery had lingering effects throughout his body. Now healthy and enjoying the best season of his career, the Astros’ co-ace tells Morosi that he hopes to play for another decade. “In my head, right now, I’m thinking 45,” said Verlander when asked how long he wants to continue pitching. “I don’t know if that’s realistic. I’m going to go as long as I can, until something changes.”

Twins righty Ervin Santana will continue his rehab assignment with a start today at the High-A level, as Mike Berardino of the St. Paul Pioneer-Press tweets, after throwing 45 pitches in his first outing.* Santana has spent the first two months of the season on the mend from finger surgery, but is now ramping up in earnest in advance of a return to the MLB mound. The 35-year-old has turned in two-straight excellent campaigns in Minnesota and will be looked to for a boost again this year. Santana’s ultimate return could create some interesting rotation questions for the Twins. Veteran Lance Lynn has lagged Kyle Gibson and eye-opening youngster Fernando Romero in output thus far, so it’s tough to guess how the club will create an opening when Santana is ready. Of course, there’s still time for the picture to change in the interim.

*An earlier version of this post mistakenly indicated that this would be Santana’s first rehab outing.

Susan Slusser of the San Francisco Chronicle examines Athletics closer Blake Treinen’s improved results since coming to Oakland last summer. The big righty has always shown phenomenal pure stuff in the majors, but had not quite figured out how to maximize it on the hill. While he’s handing out less walks than before, he’s also working in the zone less than in prior years. And he has generated less grounders (a still-impressive 53.3%) in exchange for a jump in swinging-strikes (all the way up to 18.8%). Treinen credits experience gained through “the maturation process.” Whatever the precise cause, the results — a 1.19 ERA with 10.7 K/9 and 2.8 BB/9 over 22 2/3 innings in 2018 — certainly suggest that he has settled in nicely.

Here are a few more relief-related notes from out west:

The Rangers have claimed infielder/outfielder Renato Nunez from the Athletics and transferred right-hander Tim Lincecum from the 10-day disabled list to the 60-day DL, Texas executive vice president of communications John Blake announced.

Given that he’s out of options, the 24-year-old Nunez entered spring training in a do-or-die position, but he wasn’t able to seriously vie for a roster spot after suffering a left hamstring strain early in camp. It wouldn’t have helped his cause, anyway, that the Athletics are set at his two main positions with first baseman Matt Olson and third baseman Matt Chapman.

Nunez also has some major league experience at second base and in the outfield, though he has only collected 38 plate appearances in MLB. The majority of his time has been spent at the Triple-A level, where he has batted .241/.301/.461 in 1,110 PAs. Nunez seems unlikely to garner much playing time with his new team, which has Joey Gallo at first and Adrian Beltre at third, though second baseman Rougned Odor is on the disabled list.

Meanwhile, Texas’ pitching staff will continue to go without Lincecum, who has been dealing with blister issues since March. The Giants icon and two-time Cy Young winner, who signed a $1MM deal with the Rangers just over a month ago, could be a bullpen piece for Texas when he’s ready to take the mound again. He last pitched in the majors on Aug. 5, 2016, as a member of the Angels.

A few pitching notes from around the majors…

Extension talks between the Twins and Brian Dozier are “dead,” reports ESPN’s Jerry Crasnick, who notes that the slugging second baseman has no intention of discussing a long-term deal during the season and will hit the open market next offseason (Twitter link). That much has looked apparent for much of the spring, as Dozier has reportedly been disheartened by Minnesota’s lack of engagement in extension negotiations despite a vocal desire on his behalf to remain in the Twin Cities for the long haul. A lack of an extension, of course, doesn’t mean Dozier’s days in Minnesota are numbered; he’ll assuredly receive a qualifying offer if he has a characteristically strong season in 2018, and the Twins will likely keep up with his market in free agency next winter. It seems probable that Dozier will remain with the Twins for the bulk of the season, as the AL Central features three rebuilding clubs — the Royals, Tigers and White Sox — and looks to be largely a two-horse race between Cleveland and Minnesota even before the season begins in earnest.

Red Sox starter Chris Sale left today’s start after being struck by a comebacker off the bat of J.D. Davis. Chad Jennings of the Boston Herald was first to tweet that the club called it a hip contusion. Thankfully for fans in Boston, the X-rays on his hip came back negative (according to Pete Abraham of the Boston Globe). For his part, Sale himself has said that he feels fine and that it “looked a lot worse than it actually is.” The lack of serious injury to their prized left-hander brings a sigh of relief to the Red Sox, as they need him now more than ever; Alex Cora announced today that both Eduardo Rodriguez and Drew Pomeranz will begin the season on the DL (h/t Sean McAdams of the Boston Sports Journal). With Steven Wright set to face a 15-game suspension, that leaves Brian Johnson and Hector Velazquez at the back end of the club’s rotation. With David Price no sure bet to stay healthy, any questions surrounding Sale would have been wildly unsettling for a club hoping to compete with a tough Yankees ballclub for the AL East crown.

Other injury-related news from around the league…

Diamondbacks outfielder Steven Souza Jr. left the team’s game Wednesday with an apparent right shoulder injury, Richard Morin of the Arizona Republic reports. There’s no word on the severity yet, but the Diamondbacks are left to hope it’s nothing serious after acquiring Souza from the Rays last month. The 28-year-old Souza posted his best season in 2017, hitting .239/.351/.459 with 30 home runs in 617 plate appearances en route to 3.7 fWAR. If healthy, he should help make up for the D-backs’ offseason loss of outfielder J.D. Martinez, who signed with the Red Sox.

And now for the latest from the AL West…