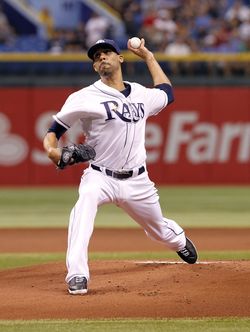 After earning $10.1125MM this past season, David Price already seems to be pretty close to uncharted territory for his third year of arbitration eligibility. Given his career accomplishments, including a Cy Young Award, three All-Star appearances, a 71-39 record in the toughest division in baseball, as well as a 3.19 career ERA in 973 innings, Price seems to be a rare breed.

However, one of the most glaring results that I noticed when putting together my arbitration model for MLB Trade Rumors was that career statistics just don’t matter much for players who reach arbitration unless it’s their first time. Actually—that’s a bit of an overstatement. You always earn more if you have better career statistics before your platform year, but the only channel through which that happens is by affecting your current year salary. For Price, this is why his arbitration case will come down to the question of, “How much of a raise on top of his current $10.1125 million salary will he earn?” However, the size of his raise will have almost nothing to do with his statistics prior to 2013.

His 2013 statistics were decent, but not spectacular compared with previous years. He won only 10 games, his lowest total in four years, and he failed to reach 200 innings for the first time in the last four years as well. Innings and wins are the most important statistics in arbitration for starting pitchers, and since Price was atypically pedestrian this year with respect to these statistics, his raise will be pedestrian as well. We have him projected at $13.1MM for 2013 and looking through comparables, this seems very likely to be near where he lands, or slightly below it.

In my first search for players with similar statistics to Price’s 10-8 record, 3.33 ERA, and 186 2/3 platform year innings, I decided to look for pitchers with between 8-12 wins, ERAs between 3.00 and 3.70, and anywhere from 175-200 innings in my database. This database includes all pitchers in Price’s service class during the previous seven years. Three names emerged as possibilities, and they seem to sandwich Price’s salary pretty well.

Anibal Sanchez went to a hearing with the Marlins in 2012 to earn a $4.3MM raise. He had only gone 8-9 with a 3.67 ERA, but he did have a few more innings than Price at 196 1/3. Sanchez also had 202 strikeouts, far more than Price’s 151. However, the combination of a mediocre record with a good ERA does make him a reasonable comparable for Price. Of course, the fact that the case went to a hearing that the player won means that the actual salary might have been an overpay, due to the Marlins’ low counter-offer of a $2.6MM raise.

Wandy Rodriguez’s $2.5MM raise in 2011 as part of a three-year deal could be a floor as well, but he had actually been offered a $3MM raise when numbers were initially submitted (and he requested a $5.25MM raise). He went 11-12 during the previous year with a 3.60 ERA, while amassing 178 strikeouts in 195 innings. Again, his numbers are very similar to Price’s.

Matt Garza got a $3.55MM raise in 2012 after going 10-10 with a 3.32 ERA in 198 innings, along with 197 strikeouts. Except for the fact that Garza came in with a higher strikeout total, he looks like a very good comparable for Price. Citing Garza may be a good way for the Rays push down Price's raise below Garza’s.

Expanding the innings criteria a little more, we can see a potential comparable in Brandon McCarthy, also in 2012. He went 9-9 with a 3.32 ERA in 170 2/3 innings with just 123 strikeouts. He got a $3.275MM raise, which might be where Price should try to aim.  Another possibility for the Rays to throw into the mix is Kevin Correia, who got a $2.85MM raise in 2010. That came after he went 12-11 with a 3.91 ERA in 198 innings, with 142 strikeouts. Correia might serve as a decent option for the Rays to suggest as a comparable for Price, and may be enough to keep his raise under $3MM.

Regardless of which of these players looks like the best match for Price, it’s pretty clear that he is going to stay well within the range of a $3MM raise, which is right where the model predicts him. Although I think he may be able to push his raise up to $3.5MM, meaning that he will earn a little more than the model projects, he still represents a very knowable cost for any team looking to trade for him, which is probably where this is headed anyway.