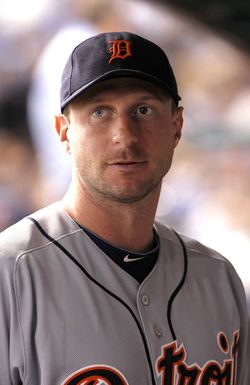 The current record raise for an arbitration eligible starting pitcher with five years of service time is now seven years old. Carlos Zambrano received a shocking $5.9MM raise back in 2007 after finishing 16-7 with a 3.41 ERA in 214 innings with 210 strikeouts. No other pitcher has come close to this amount. In fairness, this raise was somewhat of an anomaly and still looks like a big outlier, but the raises have slowly inched closer to this amount. Cole Hamels received a $5.5MM raise in 2012 after a 14-9 campaign with a 2.79 ERA. This year, however, it looks like this record may be broken once and for all by Max Scherzer.

Scherzer is coming off a $6.725MM salary, and the model sees him getting $13.6MM in 2014. Although this would beat the record by $975K, it seems like a very reasonable estimate for Scherzer this coming season. This was the breakout season that I had suspected Scherzer had in him for a few years. Especially after leading the league in SIERA last year (which has a higher correlation with the following year’s ERA than ERA itself or other comparable statistics), it seemed like Scherzer had just been unlucky.

This year, he made that assessment look accurate. He posted a 2.90 ERA in 214 1/3 innings, while striking out 240 hitters. His SIERA even declined slightly since last year. However, Scherzer also had the good fortune of a large helping of run support this year, which helped him compile a 21-3 record. Wins and innings are by far the most important statistics for a starting pitcher in arbitration, and these clearly will give him a strong case going into arbitration.

Scherzer also has among the most innings of eligible pitchers with similar service time in recent memory. Roy Oswalt had 220 2/3 innings back in 2007, but signed a multi-year deal instead of sticking with one-year agreements. Zambrano (214), Hamels (216), and Vargas (217 1/3) all fell in a similar range, and they received raises of $5.9MM, $5.5MM, and $3.65MM. Of course, all had fewer wins and only Hamels had an ERA under 3.00 like Scherzer does. In fact, Hamels is the only pitcher with an ERA under 3.00 among starting pitchers with similar service time to Scherzer in the last seven years with enough innings to qualify for an ERA title.

The floor for Scherzer really does seem to be Zambrano’s $5.9MM raise. Combine a superior set of platform year statistics, along with a probable Cy Young in his trophy case, and Scherzer seems likely to set a new record for starting pitchers. If the Tigers don’t sign him to a multi-year deal, I think that something in the $13.6MM range that the model projects is likely to be where he lands.

An interesting parallel case will be going on for Clayton Kershaw, who is also eligible for arbitration eligibility this offseason and also has five years of service time, and seems to be a better comparable for Scherzer than any of the pitchers mentioned above. Kershaw only went 16-9, which is much worse than Scherzer’s 21-3, but he had 236 innings pitched and a 1.83 ERA, so if he signs before Scherzer, you can bet their Scherzer’s team will be eager to use him as a comparable.  Check out my arbitration breakdown for Kershaw here.

One or both of these players may sign a long-term extension, so neither will necessarily set the record. But either way, both of them will be getting substantial raises in the neighborhood of $7MM more than they earned last season, and both will set the bar higher for arbitration eligible pitchers with five years of service time in future years.