Looking for more stability in their rotation last offseason, the Angels dealt from their surplus of corner bats and sent Kendrys Morales to the Mariners in exchange for innings eater Jason Vargas. A freak injury cost Vargas about 50 or so innings of his season, but his final numbers look similar to what he's produced over the three previous years. He'll look to cash in on that consistency as a free agent.

Vargas is an innings eater, and there's something to be said for free agents who can be expected to take the ball every fifth day. 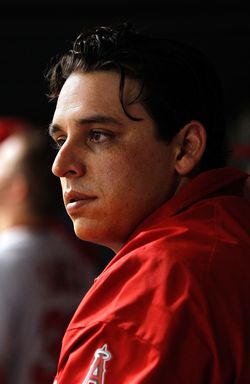 A freak blood clot that required surgery landed him on the shelf for nearly two months, but aside from that, Vargas hasn't been on the disabled list since 2008. He's had only one arm-related injury in his career — a minor offseason procedure to remove bone chips from his elbow in October 2007.

Even though he missed nearly two months in 2013, Vargas still racked up 150 innings, and the missed time brought his yearly average down to a still-strong 190 innings dating back to 2010. Vargas has a 3.97 ERA in that time, thanks largely to his plus command (2.5 BB/9 in that stretch). His strikeout rate has steadily crept upward over the past four seasons as well.

Vargas was a late bloomer and did some of his early work out of the bullpen. As such, he has just under 1,400 professional innings under his belt. He doesn't have a lot of mileage on his arm for a 31-year-old, and he won't be attached to draft pick compensation, as the Angels don't figure to make him a qualifying offer due to luxury tax concerns.

Vargas' strikeout rate may be on the rise, but even the career-best K/9 that he posted this season was a below-average 6.5. His fastball sits in the 87-88 mph range, so he's not going to overpower any hitters.

Vargas is a fly-ball pitcher that has benefited from pitching in pitchers parks such as Seattle's Safeco Field and Angels Stadium in Anaheim over the past four seasons. Vargas' 4.61 road ERA, 4.70 road FIP and 4.73 road xFIP point to the fact that he's benefited tremendously from those spacious environments. His home numbers — 3.39, 3.76 and 4.23, respectively — are much stronger and suggest that he's best-suited for a bigger park.

Vargas is an excellent athlete that played three seasons at quarterback in high school football and is an avid golfer in his free time. His arrival with the Angels reunited him with college teammate Jered Weaver. Baseball runs in Vargas' family, as he is the second cousin of Randy Velarde, who enjoyed a 16-year career as an infielder with the Yankees, Angels and A's. Vargas is very active in charities and co-founded Estrella Youth Sports in Goodyear, Ariz. — a non-profit youth program that aims to develop positive role models through participation in sports.

Vargas isn't an elite rotation piece, and teams that need top-of-the-rotation arms aren't likely to make him a prime target. He's a strong back-end starter and can slide into the middle of a rotation if needed, and plenty of teams will be looking for such arms. The Angels will likely make an effort to re-sign Vargas to a multiyear deal, and the Apple Valley, Calif. native is interested in a return. The Orioles showed some interest on the trade market this summer.

In addition to the O's and Angels, I'd expect contenders like the Royals, Indians and Pirates to show interest. Teams that didn't contend in 2013 but simply need reliable innings could show interest as well, with the Twins, Mariners, Brewers, Padres and Giants coming to mind.

Teams in smaller parks will likely be more hesitant regarding Vargas, but the Phillies, Yankees and Blue Jays are all looking for pitching help as well. Vargas and agent Nez Balelo of CAA Sports should have plenty of interested teams to negotiate with over the course of the winter.

Vargas doesn't come with a ton of upside, but he's a consistent source of 200 or so innings at or slightly below the league average. Even if he's not an outstanding performer, durability pays on the open market. Vargas is younger than Jeremy Guthrie, and his four years prior to free agency are similar to Guthrie's in terms of innings pitched, ERA+, K/9 and BB/9. In terms of superficial stats, Vargas stacks up well against Ricky Nolasco over the past four years, though the latter has him dwarfed in terms of sabermetric stats. He's similar to Scott Feldman in terms of performance, but Vargas has a much more consistent track record.

Balelo could try to parlay his client's durability and consistency into a four-year contract, given his relative youth, but three years is more realistic for someone with Vargas' limited upside. He should be able to top Guthrie's contract but is likely to fall short of whatever amount Nolasco will receive.