FRIDAY: Crain's one-year deal with the Astros is worth $3.25MM, tweets Jon Heyman of CBS Sports.

TUESDAY: The Astros have signed right-hander Jesse Crain to a one-year contract, the team announced in a press release.  Terms of the contract weren't disclosed.  Crain is represented by Relativity Baseball.

Crain posted a 11.3 K/9, 4.18 K/BB rate and an incredible 0.74 ERA in 36 2/3 relief innings with the White Sox in 2013.  These eye-popping numbers put Crain on pace for the best season of his 10-year career, but his season was cut short by a shoulder injury.  Crain didn't pitch after June 29, though he was still elected to his first All-Star team.  Crain was still acquired by the Rays at the trade deadline with the hopes that he would recover, but the 32-year-old never threw a pitch as a Ray. 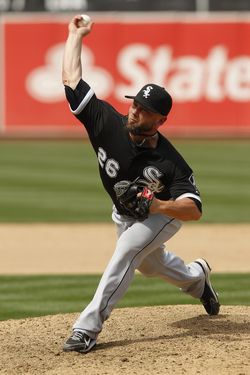 Crain's health is still something of a question mark, as Astros GM Jeff Luhnow told reporters (including Evan Drellich of the Houston Chronicle) that Crain has yet to begin his throwing program following his surgery in October.  That said, Crain passed his physical and Luhnow believes Crain is progressing well.  "We're not going to rush him but we feel like he's going to be ready to go certainly early in the season if not before," Luhnow said.

As MLBTR's Steve Adams noted in his Free Agent Profile of Crain back in October, a one-year deal would help Crain re-establish his value following his shoulder injury and possibly set him up for a more lucrative multiyear contract next winter.  While Crain apparently had some two-year offers on the table, he instead chose to just take a single guaranteed year in a familiar locale — Crain pitched for the University Of Houston.  Luhnow said in the press release that the team "targeted [Crain] early in the offseason," so the quick push from his semi-hometown team also might've helped influence Crain's decision.  The Cubs and Rockies were two of the other clubs known to be interested in Crain's services.

Astros relievers posted a league-worst 4.92 ERA in 2013, so the bullpen was obviously a major focus for Luhnow this winter.  Crain joins Matt Albers and Chad Qualls as relievers the Astros have signed to Major League free agent deals, and Houston has also added Anthony Bass, Raul Valdes, Darin Downs and Peter Moylan in other moves.  Luhnow told reporters (including Evan Drellich) that manager Bo Porter will decide who closes games for the club and that Crain will be in the mix, though Crain has never worked as a closer before.

Crain ranked 46th on Tim Dierkes' list of this offseason's top 50 free agents, and Tim correctly predicted that Crain would end up with the Astros.