The Cubs have officially signed free agent starter Jason Hammel to a one-year, $6MM deal. The 31-year-old Octagon client can earn an additional $1MM in incentives. 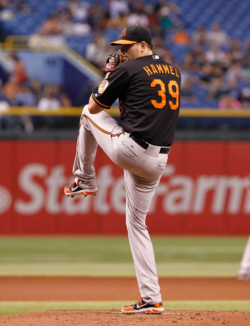 As MLBTR's Tim Dierkes noted in ranking Hammel 48th on his list of the top fifty free agents, Hammel saw a dive in his strikeout and groundball rates and dealt with elbow issues. He ultimately ended up with a 4.97 ERA over 139 1/3 innings in 2013.

The Cubs had signed only three players to guaranteed MLB deals before landing Hammel, none of whom are starters. Hammel will presumably fill out the club's 2014 rotation, joining Jeff Samardzija, Edwin Jackson, Travis Wood, and Jake Arrieta to form the regular starting five.

After missing out on Masahiro Tanaka, Chicago had been rumored to be looking to make a value play on a mid-tier starter. WIth recent injury issues holding down his value, Hammel looks to be the same kind of pitcher that the Cubs targeted last year, when they inked Scott Baker (one year, $5.5MM), Scott Feldman (one year, $6MM), and Carlos Villanueva (two years, $10MM).