As the Mets look to transition from rebuilding to contending, the club made its largest free agent outlay in years, but will go without recovering ace Matt Harvey.

Notable Minor League Signings
Trades and Claims
Extensions
Notable Losses
Needs Addressed
The Mets addressed their biggest issue, perhaps, by finally saying goodbye to two contracts that turned sour. The club paid its final obligations to both Santana ($5.5MM buyout of $25MM option) and Jason Bay ($3MM buyout on $17MM option). Of course, Bay had already been cut loose, and technically will still be paid for some time due to a deferment arrangement. Likewise, the organization has reportedly made headway in moving past the well-documented financial tribulations of its ownership group. 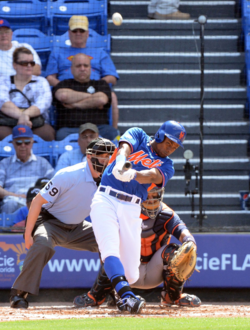 Ultimately, the deal is not without its risks, but how many free agent contracts are? As Eno Sarris of Fangraphs argued in the aftermath of the signing, Granderson should be a solid-enough defender with a switch to the corner, should be able to stay valuable at the plate, and ultimately may not have received a "glaring overpay." If nothing else, of course, the signing represents the clearest sign that the Mets are ready to supplement their slate of attractive young arms with free agent spending, an important development for an organization that has been in a holding pattern while its owners dealt with the fallout of the Bernie Madoff scandal.

On the other hand, Granderson is already 33, missed much of last year due to wrist injuries, and has seen his strikeout percentage rise quite sharply in recent campaigns. In his limited action last year, Granderson's power dropped back significantly: he landed with a .178 ISO mark, after putting up .290 and .260 marks in 2011 and 2012, respectively. And Granderson, who has never reached base at a consistent clip, is carrying a sub-.320 OBP over the last two seasons. While baseball's inflationary environment means that the deal carries less relative risk than did the Bay contract, it could be that New York is spending a lot of money for a non-impact player who will be well on the decline by the time the team is ready to compete.

One could say that the team did not make enough of an immediate impact with its free agent signings to warrant the cost. After all, with Harvey out, a jump to playoff contention seems a tall order. But the Opening Day payroll is well shy of last year's tab, and New York can reasonably expect to be better. Given the restlessness of its fans and the organization's hope of building off of a young core to contention in the very near term, it made some sense to put a decent product on the field now while avoiding any truly massive deals that might have stung down the line. The question, of course, is whether that might have been accomplished at a cheaper price, and whether any of the recent commitments will have an impact on future needs.

At present, it is hard to view the Mets' offseason as being fully complete, in large part because major questions (with both short and long-term ramifications) are still open for answers. First base, shortstop, and the back of the bullpen could all see significant moves in the coming months. The true test of Alderson and his staff could well be yet to come, as he navigates the decisions at those spots, manages the team's young arms, and plots the final moves to ready the team for full-on contention.